“My interest is in the future because I am going to spend the rest of my life there.” -C.F. Kettering

In Part II, we shared an analysis of the base rate of corporate revenue growth. On its face, the analysis seems to offer investors a simple, straightforward, rules-based forecasting method. If only forecasting was so easy!

There is a major problem with using the McKinsey reference class data when making growth forecasts. It includes data on all public companies and goes back to 1963. While this wide breadth of data helps reassure us that the reference class is complete, it also means it is a very blunt tool.

For instance, a lot has changed since 1963. In this chart, you can see that technology adoption rates have persistently sped up over time. 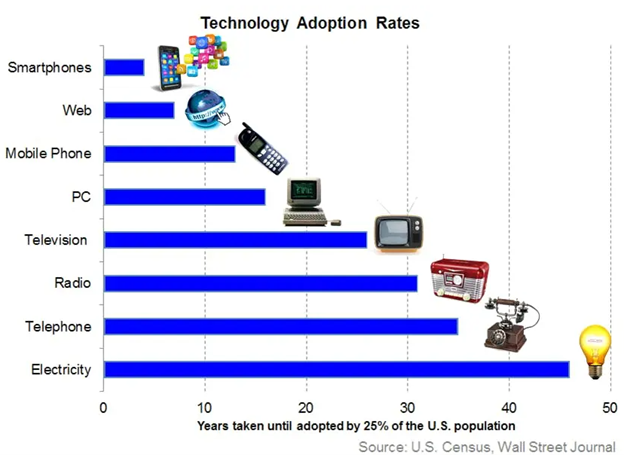 If you are examining a new technology company and thinking about its future growth rate, taking into account how long it took for television to be adopted or the speed of growth of home computers might not be so relevant at a time when a company like Zoom can go from a relatively obscure corporate video conferencing service to a service used by people all over the globe every day in less than two years.

The nature of the US economy has changed over the last 60 years as well. In the chart below you can see that during this period, the source of growth of the US economy has pivoted sharply. Rather than a majority of corporate growth investments being made in tangible assets, such as machinery, equipment, and factories, most growth investments today are made in intangible assets such as research and development, branding, and training of a company’s human capital. 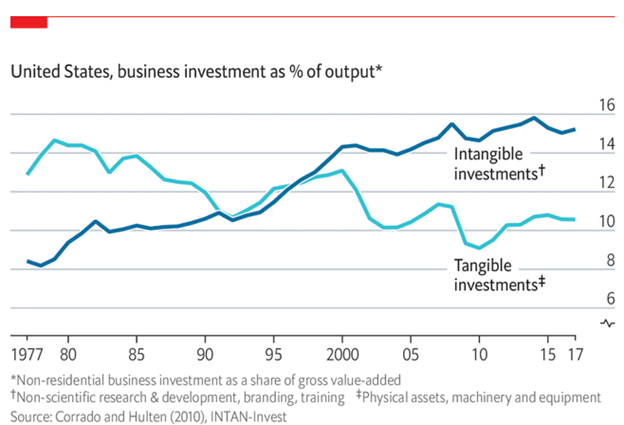 It is easy to understand why a software company can grow more quickly, for longer, than a car company. If demand for a piece of software increases, more copies of the software can be downloaded or accessed in a Software as a Service model with little to no effort by the company. But if demand for cars increases, a car company needs to build more factories and buy more equipment. This takes time, is difficult, and requires the reinvestment of massive amounts of capital.

This shift in the economy is so large and so important that it triggered Warren Buffett to declare in 2017 that he had embraced a new phase of his ever-evolving investment philosophy.

“Buffett has pointed to something new. Something so important that even though it was reported on in real time, he thinks people didn’t appreciate enough the importance of his comments.

“I believe that probably the five largest American companies by market cap…they have a market value of over two-and-a-half trillion dollars…and if you take those five companies, essentially you could run them with no equity capital at all. None.” -Warren Buffett, 2017 Annual Meeting.

Buffett went on to call these “ideal businesses,” the same phrase he used in the past to refer to companies that reinvested massive amounts of capital at high returns.

Then, the next day in a CNBC interview with Becky Quick, Buffett referenced these comments again saying “I did mention one thing at the meeting, which I don’t think people appreciated at all… So, you have close to 10% of the market value perhaps of the United States in five extremely good businesses that essentially take no capital. Now that was not the case in the past.”

The “five extremely good businesses” that Buffett was talking about are Apple, Microsoft, Amazon, Google, and Facebook (Buffett is quick to remind the interviewer to include Facebook in the list when she leaves it out initially). Then, when Quick asks him “Would you like Berkshire’s businesses to be more reflective of that sort of new paradigm?” Buffett says “I’d love it.”

Apple, Microsoft, Amazon, Google and Facebook. That’s Warren Buffett’s idea of what he’d like to see Berkshire Hathaway’s portfolio look like going forward. These are the new “ideal” businesses in his view.”

Buffett’s comments, and his redefinition of his phrase “ideal businesses” from those who have an opportunity to reinvest large amounts of capital in tangible assets, to those that can grow with little to no investment in tangible assets, were a recognition of just how much the US economy has changed.

In a recent paper, Michael Mauboussin, whose previous paper The Base Rate Book is one of the most valuable sources of data on this subject for investors, sought to break out the base rates of growth for tangible vs intangible based businesses. Drawing on the work of another research paper which sought to sort public companies by their tangible vs intangible asset intensity, Mauboussin wrote:

“In a recent paper, three finance professors built a model to infer the value of intangible assets… They found that the order of ranking from highest to lowest by industry was healthcare, technology, consumer, and manufacturing. They also placed about one-third of the companies into an “other” category because they didn’t fit neatly into one of the industries.

We calculated the median sales growth rate for companies in each of those categories using the constituents of the Russell 3000 from 1984-2020. We also examined the standard deviation, a measure of the dispersion, of the distributions. Exhibit 1 shows the results for the full sample.

The sales growth rates, measured either as the median or average, consistently go from highest for companies that are most intangible-asset intensive to lowest for those that are least intensive. While the short-term numbers are noisy, the relationship holds true over 1-, 3-, 5-, and 10-year periods.”

As you can see in the chart, intangible asset-based businesses have grown materially faster than tangible asset-based businesses. It may be a heroic assumption to think that a manufacturing business needing to build and buy factories and equipment can grow at nearly 10% continuously for a decade. But this same outlook would be just an average outlook for a health care company built on intellectual property with little need for acquiring large amounts of tangible assets to fuel their growth.

At first review, it may seem that the reference class in this base rate data is more precise and modern and, thus, more useful than the blunt base rate data from McKinsey. The McKinsey data goes back to 1963 and grouped companies by their starting growth rate rather than their intangible asset intensity. But this new data only goes back to 1984. We know that this start date aligns with the rise of the information age and the rise of technology’s role in every aspect of life. And we know that during this time period, US health care inflation started running at very elevated rates, as the American health care system broke away from all other developed economies as it devoured more and more of household and government budgets, even as health care outcomes for patients did not improve commensurately.

There is no single “correct” reference class or base rate for investors to use. Mauboussin’s Base Rate Book data, his more recent analysis of tangible vs intangible-based growth rates, the McKinsey data set, and other studies of this type all provide investors with valuable information that can be used to enhance forecasting.

An example will help make this clear. When thinking about the future growth rate of Google in our portfolio, considering the growth rate of oil companies and banks in the 1970s is probably irrelevant. On the other hand, if you created a reference class of advertising supported search engines with over $100 billion of revenue, your sample set would only include the last few years of Google’s own history and, thus, be no more useful to making forecasts than simply extrapolating from Google’s own historical results.

But there is no doubt that base rates, so long as you recognize them as only one tool in your forecasting toolbox, not magic formulas for predicting the future, are wildly underutilized by investors. In fact, base rates are wildly underutilized across all forms of forecasting. This “base rate neglect” has been documented extensively in a wide range of studies. The fact is most people think only of the item at hand when making a forecast and ignore the fact that other similar instances have occurred in the past.

For example, if you look at the chart from Ed Yardeni in Part I on the inaccuracy of Wall Street analysts’ earnings forecasts, you’ll note that initial expectations have typically forecasted about 10% earnings growth despite the fact that over the long term, corporate earnings growth has only averaged about 5%-6% a year. So, it appears that “base rate neglect” pollutes professional investors’ forecasts just as much as is seen in other forecasting disciplines.

Base rates are an excellent tool to frame the range of potential outcomes, or “tie yourself to the shore” when you go exploring in the abyss. But they do not provide any easy answers to the difficult questions raised when making forecasts about a specific company.

In Part IV of this series, we’ll use Netflix as an example for how we use both inside view and outside view information to make forecasts.