Forecasting Growth Part I: The Siren Song of Growth

“Therefore, take me and bind me to the crosspiece halfway up the mast; bind me as I stand upright, with a bond so fast that I cannot possibly break away, and lash the rope’s ends to the mast itself. If I beg and pray you to set me free, then bind me more tightly still.” -Homer, The Odyssey

In the Odyssey, Odysseus is warned by Circe, the daughter of the sun god Helios, to steer clear of the Sirens, whose beautiful songs lure adventurers to their deaths. She warns him that he must stuff the ears of his crew with wax so that they are unable to even hear the Sirens. But for Odysseus, she advises him to be bound to the ship’s mast so that he may hear the glory of their songs, while remaining safe.

When attempting to forecast growth, investors face a similar dilemma. In this series of posts, we’ll explain how we use a similar set of techniques to Odysseus so that we can venture amongst the glorious potential of high growth businesses, while avoiding being lured into traps that create devastating losses.

Investing is always and only about the future. When you make an investment in a company, you obtain a claim on the future cash flows of that company. The key problem in investing is that there are no real-life oracles to consult and so the future is intrinsically unpredictable.

In this analysis by Ed Yardeni, the historical earnings growth estimates for the S&P 500 are displayed. For each year, the estimates that were first issued a year prior up until the final estimate at year-end are charted. For instance, looking at the light blue line representing the year 2011, you can see that as of January 1, 2010, analysts expected the 2011 earnings growth rate to be about 22%. But by the time 2011 ended, actual growth came in at just 15%. 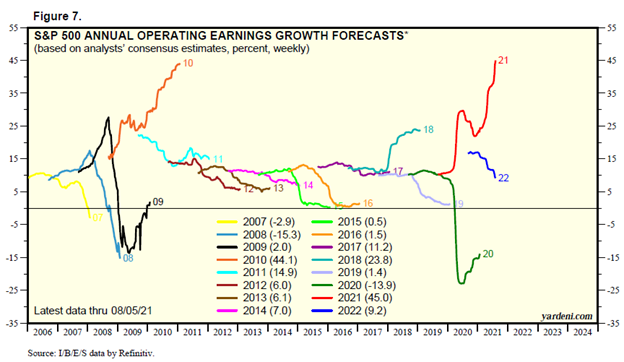 As you can see on the chart, in most years the initial growth estimates were way off base. Generally, the initial estimates were too high, with analysts systematically reducing their growth forecasts as the future drew closer. The two major exceptions to this tendency of analysts to be overly optimistic about growth were 2010 and 2021. Both years occurred just after a recession and in both cases, analysts were far too pessimistic as they missed the coming inflection in the economy. The rise in 2018 earnings estimates was an anomaly caused by the change in the corporate tax rate, which caused analysts to increase their estimates, but only after the new tax law was actually passed. In every other year, initial growth expectations proved to be overly optimistic.

The chart shows that investors as a group tend to be far too optimistic about growth, except for just as the economy is coming out of a recession, at which point investors end up being unhelpfully pessimistic.

Traditional value investing selects stocks that trade at inexpensive valuations based on historical or current financial results. This general approach was much more successful than growth investing for a very long time. This was primarily because it turned out that assuming the future would be a lot like the past was a more accurate approach to forecasting than the overly optimistic (punctuated by excessive pessimism) approach used by growth investors.

But traditional value investing has underperformed growth investing for the last two decades. It turns out that an era characterized by the rise of the global internet, a worldwide financial crisis, and a global pandemic was… different. The future turned out to be not so much like the past and forward-looking investors were well rewarded for recognizing this as it was happening.

At Ensemble Capital, we think that all investors, even those who purport to not make forecasts, make either implicit or explicit forecasts every time they decide to buy or sell or even just hold a stock. Because ownership of a stock is only as valuable as the future earnings power of the company in question, all investors, even those who simplistically assume the future will be like the past, must make judgements about the future.

But notwithstanding the strong relative performance of growth investors in recent decades, listening to the siren song of growth can be extremely dangerous. Investors who make explicit forecasts of rapid growth for the companies they invest in run the risk that they will be lured into taking devastating losses if those beautiful forecasts turn out to be a mirage.

So, the question at hand for investors is not whether they should forecast the future growth (or lack thereof) of corporate earnings power. Rather it is how should investors go about making those forecasts without being too optimistic, nor by naively ignoring growth potential.

As Warren Buffett has said, “growth is always a component in the calculation of value, consisting of a variable whose importance can range from negligible to enormous and whose impact can be negative as well as positive.” Thus, no matter what investment approach you use, the future growth of a company is a key variable in driving investment results. This is true whether you are buying high growth stocks or low growth stocks. It is true whether you make explicit long-term growth forecasts or whether you make no explicit growth forecast at all.

But while future growth is very difficult to predict, investors can embrace a probabilistic approach to growth forecasting. This approach recognizes the lack of certainty about the future, while also not naively pretending that nothing about the future can be known.

In the rest of this series, we’ll explore the tools and approaches we use for making probabilistic forecasts about future growth.