We recently hosted our quarterly client webinar. You can watch the reply HERE and read a full transcript HERE.

Below is an excerpt from the webinar discussing our investment in Netflix, Inc (NFLX).

Today, we want to highlight the competitive and financial strengths that Netflix has demonstrated since we last discussed the business a couple of years ago, especially in light of the expected competition that’s finally arrived from traditional media companies launching their own streaming services led by Disney. In addition, the emergence of the COVID-19 pandemic around the world has led to accelerating benefits for digital entertainment and global production.

Two years ago, we shared that Netflix was reaping the benefits of its unique business model, where a generational shift in video services over the Internet enabled Netflix to dream big and bet big – to become the first global scale direct to consumer subscription media company. 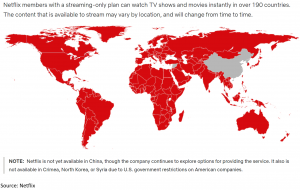 Unlike traditional media companies, its growth opportunity was not limited by regional relationships with cable and satellite companies, who had built and owned physical connections to the customers. It was one that was open in reaching anyone with the more pervasive virtual connection, the Internet, wired or wireless, anywhere in the world at the click of a button. The traditional link between reaching a customer as a media provider and the physical infrastructure build was no longer a limit to growth and economics.

Netflix’s success in realizing this opportunity has everything to do with the company’s culture born of its history as an internet-based, innovation-driven business, which drove it to build capabilities that have underpinned its execution.

We list these capabilities that comprise the moat Netflix built, including the scale of its content catalog, its phenomenal subscriber acquisition engine which drives a rapidly growing budget for fresh content, and a global intelligent delivery network. It is now one of the largest entertainment content buyers amongst media companies anywhere and one the largest distribution “networks”. 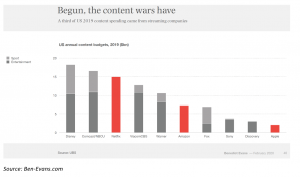 As HBO’s top rival at the Emmys, the historical king of quality content, we know Netflix has that quality curation skill down. But it also caters to the Rom com, pop drama, mystery, sci fi and Adam Sandler fans too. And versions of such genres created by local producers for their local cultures around the world. Award winning documentaries, kids’ animation, stand-up comedy, and a plethora of cooking, travel, romantic, and even cleaning reality shows are part of its bag too.

With Netflix you get a whole mix of content from creatives around the world for all viewer interests, unbound by the limits of time slots, channel capacity, and advertising loads. The range has proven to increase Netflix’s audience, engagement, and addressable market. Netflix has not just achieved its goal of “becoming HBO before HBO becomes Netflix”, as its chief content officer Ted Sarandos used to quip, but it’s now substituting for the traditional cable bundle. Only better, significantly cheaper, and at your convenience anywhere. 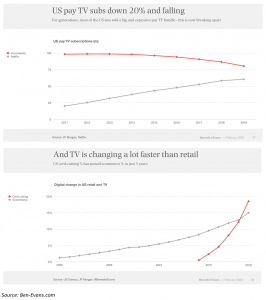 Management’s focus on building and scaling this service out has been a huge creator of value for customers, content creators, and shareholders. It adroitly utilized cheap and plentiful debt capital, to accelerate the build out beyond its contemporaneous funding capacity, a clearly smart strategy in retrospect given its wide lead today.

The results of Netflix’s urgency coupled with the decade long inertia of media incumbents are evident — Netflix has driven adoption of the streaming video market globally and become the de facto leader with a global subscriber count that is quickly approaching 200 million. 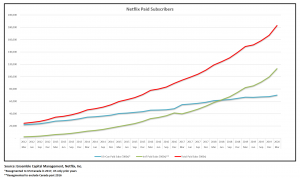 Total paid subscribers (the red line) have grown by nearly 100 million since 2016, the year we took our initial position in the company, from 89 million to 183 million subs in 1Q2020. While the international segment of the business (the green line) now accounts for the majority of subscribers and revenue, the growth opportunity there is still nascent and provides years of runway. 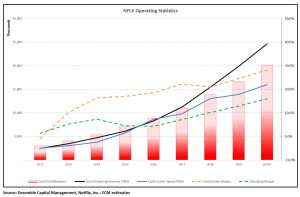 Streaming revenue is estimated to triple from $8 billion in 2016 to almost $25 dollars in 2020. Operating margins are expected to increase from 4% to 16%. And we believe that margin can continue to grow for several years as the international markets mature, just as we’ve seen them do in the US market.

Content spending more than doubled from $7 billion in 2016 to an estimated $16 billion in 2020. The widening gap between the black revenue line on the graph from the blue content spending line demonstrates the leverage in the business while the green dashed line is indicative of the operating margin growth. Given the fixed cost nature of content and production infrastructure spending at scale, we expect free cash flow generation should follow, as incremental revenues continue to disproportionately favor profit growth.

Though adoption of video over the internet had already been strong, we believe the COVID-19 era is accelerating the shift from traditional Pay TV to streaming, while also favoring Netflix’s unique, globally distributed production model. Netflix has stated its 2020 and most of its 2021 new content schedule will generally be unaffected, while legacy media companies are reported to be stuck in action even for the fall 2020 lineup. We expect that should drive incremental subscribers seeking alternative sources of fresh content. 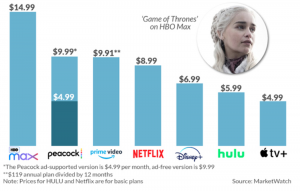 While we’ve long expected one or more of the technology leaders such as Amazon, Google, or Apple to emerge as one of the three to five long term global streaming platforms alongside Netflix, the only traditional media company we believed would be able to make a credible run for a position among them is Disney.

Disney arguably has the strongest content catalog and IP of any traditional media company, including Disney Animation, Pixar, the Star Wars and Marvel franchises, The Simpsons, and all the television content from ABC, Disney, and twenty first Century Fox Studios, while its globally recognized brand and cross-platform marketing capabilities make it formidable. Bob Iger, its chairman and highly regarded former CEO, made it clear at launch that streaming is the future of Disney and all of the company’s strategic focus was on making that transition successfully. 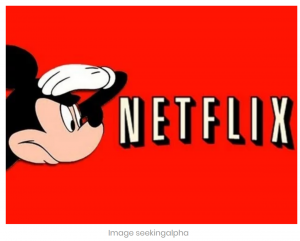 Disney took a smart and humble step in copying almost exactly the playbook Netflix developed in building its service. This included bringing in house the technical capabilities by acquiring a majority stake in BAM Tech for $2.6 billion, scaling its content catalog via its acquisition of twenty first Century Fox for $71 billion, committing to invest about $5 billion from foregone licensing revenue and expenses to build out the platform, and pricing its “premier” content service aggressively to drive accelerated subscriber growth globally. That’s $79 billion by our count.

In comparison, Netflix’s accumulated cash burn, or investment, of $11 billion since 2012 to build the market and become its leader looks like a phenomenally productive allocation of capital, which has resulted in the incremental two hundred billion dollars in market cap investors have awarded it since.

The Disney Plus streaming service was launched in November 2019 first in the U.S. with an incredible 10 million subscribers signed up on day one. The surge actually crashed its network! By the end of the quarter Disney had added 26 million subscribers, while Netflix as the U.S.’ biggest incumbent streaming service managed to add, not lose, nearly half a million new U.S. subscribers. Netflix exited the fourth quarter with 61 million U.S. subs while its global base grew by 8 million to end the quarter at 167 million subs.

With COVID-19 accelerating sign ups, the March 2020 quarter saw Netflix adding nearly 16 million new global subs to end the quarter at 183 million. Disney Plus, benefitting from its launch in the E.U., added about 16 million users, excluding the 8 million subs in India where the service was added as a free supplement to its existing HotStar service. Disney reported a total of 50 million subs including HotStar.

The market’s worries were put to rest about any sort of competitive threat Disney posed for Netflix in those first two quarters since launch. What’s clear is that the great majority of existing Netflix users added Disney Plus instead of substituting it, while Netflix’s cadence of fresh content sets a high bar for any competitor to keep up with the subscriber expectations it has set longer term. Even Disney needs time to build this level of production capability (also aided by the acquisition of 21st Century Fox Studios).

And if Disney can’t slow Netflix’s subscriber growth, we don’t think any other traditional media company can either. 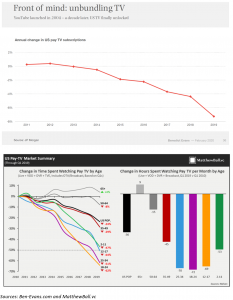 The bigger picture take away is that the huge global numbers of new streaming subscribers added in the U.S. and globally are demonstrating that instead of a war among streaming services, the more important dynamic is the accelerating decline of the high priced traditional cable bundle, at least here in the U.S., as consumer engagement and dollars are being redirected towards more modern paid and free online services. In other words, the traditional bundle’s relevance is quickly declining.

It probably won’t be long before economics will dictate that Disney offer its ESPN sports content via streaming, and that indeed will be the final nail in cable’s demise while the handful of global leaders in streaming content flourish.

You can watch the reply HERE and read a full transcript HERE.

For more information about positions owned by Ensemble Capital on behalf of clients as well as additional disclosure information related to this post, please CLICK HERE