Below is the Q2 2020 quarterly letter for the ENSEMBLE FUND (ENSBX). You can find historical Investor Communications HERE and information on how to invest HERE. Enjoy!

The performance of the Ensemble Fund (“the Fund”) this quarter was up dramatically along with the market. After performing about in-line with the market in the first quarter, the Fund performed strongly during the rebound, in part reflecting the outcomes of trades we placed in the thick of the selloff during March. The Fund was up 22.66% vs the S&P 500 up 20.54%. On a year to date basis, this brings the Fund to down 0.21% percent versus the S & P 500 down 3.08%.

We will start the letter by addressing the state of the economy, then we’ll attempt to answer the number one question we have been getting which is, “Why in the world is the market nearly fully recovered even while the Coronavirus outbreak is ongoing and millions of Americans are unemployed?”

Ensemble Capital, advisor to the Fund, held a call on March 20th, the day before the market bottomed. During that call we said:

“This will be a recession and recovery unlike any other. We cannot know how it will go or what unique features it will have. If our economy takes enormous damage in the coming months but then is able to rebound swiftly with the help of the unprecedented fiscal and monetary stimulus that is already starting, then we may see the stock market behave somewhat similarly to the Chinese market. Which hit bottom the day after the Wuhan shutdown was declared, fully recovered all of its Coronavirus related decline, and hit a new fifty-two week high on March fifth. To us a recovery in the US stock market that quickly seems extremely unlikely, we are just making note of what actually did play out in the one country that has gone through this before us.”

It seemed “extremely unlikely” at the time, but what has indeed played out is that the “unprecedented fiscal and monetary stimulus” that we wrote about last quarter, along with a faster than expected initial economic recovery, has indeed caused the market to recover quickly.

While we believe that we have a superior ability to do company analysis and select stocks that will outperform the market over the long term, we also know that we do not have any special ability to guess where the market will go in the near term.

This is one of the most frustrating realizations that we think all investors need to come to terms with. If in fact there was a way to systematically predict short-term movements in the market, we would be happy to adopt this approach. But in the absence of this ability, we know that attempts to guess where the market will go next, is one of the surest ways to ruin your long-term investment returns.

We revisit this theme now not just as a retrospective review of the past, but because today we see widespread skepticism of the rally from many investors, confident that another pullback is around the corner. The fact is, they might be right.

Markets decline quite regularly, even in the absence of pandemics and economic turmoil. But it also might not. While we all want as smooth a ride as possible on the way to long-term superior returns, the fact is that the only ride to superior long-term returns is a bumpy one.

The fact is, the Coronavirus recession has likely already ended. While you might have heard that a recession is two consecutive quarters of declining GDP, that’s just kind of a rule of thumb. Rather a recession begins when there is a widespread and significant contraction in economic activity and the recession ends once economic activity begins to expand again.

Beginning in early to mid-April, economic activity stabilized and began to recover.

In early April, the number of mortgage applications to purchase a home were running at about 35% below last year, while by the end of June, home purchase mortgage applications had rebounded to 15 to 20% above levels from a year ago. This is a nearly 80% expansion in activity since the economic contraction ended.

Mastercard (6.8% weight in the Fund) reported that the amount of money spent on their cards in early April was down as much as 26% versus last year, while by the end of June, spending had recovered to 5% above the same time period in 2019. This is more than a 40% expansion in activity. 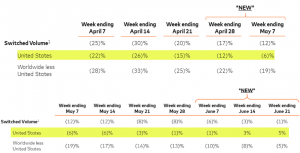 An investment in the Fund is subject to investment risks, including the possible loss of the principal amount invested. There can be no assurance that the Fund will be successful in meeting its objectives. The Fund invests in common stocks which subjects investors to market risk. The Fund invests in small and mid-cap companies, which involve additional risks such as limited liquidity and greater volatility. The Fund invests in undervalued securities. Undervalued securities are, by definition, out of favor with investors, and there is no way to predict when, if ever, the securities may return to favor. The Fund may invest in foreign securities which involve greater volatility and political, economic and currency risks and differences in accounting methods. Investments in debt securities typically decrease in value when interest rates rise. This risk is usually greater for longer-term debt securities. More information about these risks and other risks can be found in the Fund’s prospectus. The Fund is a non-diversified fund and therefore may be subject to greater volatility than a more diversified investment.