The Empire Strikes Back! Netflix and the Impending Competition

“The son of [Reed Hastings] must not become a Jedi.”

Much to the chagrin of the traditional media Empire industry, Netflix has become the leader of the global direct to consumer (DTC) streaming media (OTT) business it founded with a staggering 150MM subscribers globally. We believe the global scale it’s built up in the business makes it too big for all but a handful of traditional media and global tech companies to compete with. For a more in depth look at its business and strategy, please refer to our deep dive Netflix report. 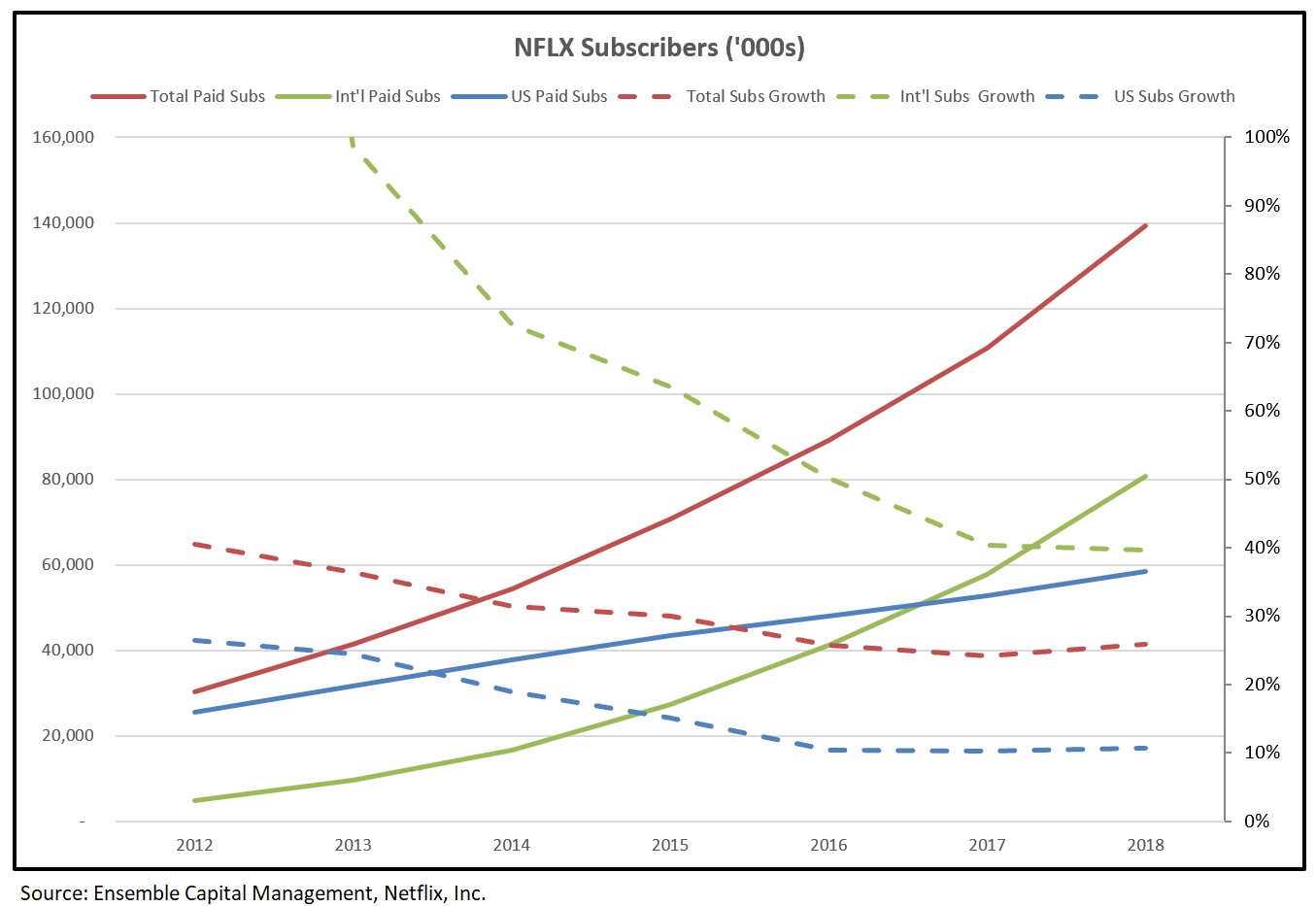 The market will become much more exciting with the launch of new competitors over the next year, especially offerings from the largest traditional media companies. The new Disney Plus service will launch in November 2019 in the US, Canada, Australia, New Zealand and the Netherlands, with plans to expand globally over the next couple of years. Disney’s DTC service will be followed by Apple’s TV+ and Time Warner’s HBO Max (reboot of HBO NOW plus more TW content) services in soon thereafter.

In our view, the global market is large enough to accommodate 3-5 global media players and many consumers will subscribe to 2 or 3 services offering their favorite content. We believe direct streaming services are redirecting the Pay TV industry’s traditional value chains around the world while expanding the market by leveraging global scale economics and modern low cost distribution via “smart” devices and 4G/5G connectivity.

Having said that, it is important to separate Netflix’s US (maturing) and international (nascent) markets.

In the US, as the pioneer in streaming video whose odds looked very long only 7 years ago, Netflix has already won. More than half of all Americans subscribe to Netflix, which is more than all the Cable TV subscribers combined (which are in slow steady secular decline). We don’t think there is a ton of growth left in the number of subscribers in the US, especially since a significant fraction share passwords, but we do think Netflix can continue to raise the price they can charge (we also believe password sharing is intentionally leveraged as a viral customer acquisition strategy and, in fact, paid for by its service pricing strategy).

Netflix is already quite profitable in the US, with an estimated operating margin of 25%*. Last quarter they raised the price in the US by 13% and still kept 99.5% of their subscribers, resulting in an 11% q/q increase in net US revenue. You can imagine what that does to enhance profitability given that a substantial portion of the increase falls to the bottom line (profits grew 20% q/q). Compare that with the narrative that “Netflix lost 200K US customers in the quarter, they’re losing their pricing power!”

As we’ve discussed in our post on Netflix’s pricing power, immediately after past price hikes, there have been one or two quarters of increased subscriber churn followed by a bounce back in subscriber growth. The June 2019 quarter was just the latest quarter to see a similar, expected phenomenon though the exact magnitude of the impact is always hard to forecast. We believe the churn is due to initial “sticker shock” and Netflix’s customer friendly policy of clearly alerting people to price increases with a simple button to cancel. But about a quarter or two later, most of these churned-off subscribers hear about a show that all their friends are talking about or realize how wonderful the convenient advertising-free service had been and sign back up, realizing that it is still an amazing bargain at $13/month for essentially a mini-cable bundle offering thousands of hours of instantly on-demand shows and movies.

“I’ve got a bad feeling about this.”

Investors are quite worried about Disney’s new steaming services, and for good reason, given its well-regarded global brand with strong marketing capabilities, popular IP based video franchises (Disney characters, Star Wars, Marvel, Pixar, etc.), and its multi-year commitment towards global expansion of its streaming services. But Disney is very late to the game and has a lot to learn about going direct to consumer with a subscription business, the execution of which is tougher than most realize. No doubt, Disney will figure this out through years of dedicated experience as Netflix has over the past 2 decades.

“Be careful not to choke on your aspirations, Director.”

After everyone thinking Netflix was bound to fail, the iconic Disney has smartly and humbly realized that their only choice is to try to copy Netflix’s strategic playbook (literally!) to scale quickly and stay relevant in the long run. We believe Disney’s new service is likely to be a big success. But the “product” it is delivering to its subscribers is primarily going to be Disney’s brand of movies and shows. So, it will be more like HBO (a great niche premium channel) while Netflix has a broader set of content akin to an entire cable bundle (a broad selection, cable TV replacement). Disney is hoping that by bundling Hulu with Disney Plus for the same price as Netflix that they can compete directly, but Hulu is not new and has attracted about 30 million compared to Netflix’s 150 million.

That said, it would not be unexpected to see a quarter or two of impact to Netflix’s gross subscriber additions in the US, as a certain proportion of new to streaming video customers give Disney Plus a try, and churn rates to increase, as those Netflix subscribers who value it the least get over their inertia (inertia is a beautiful thing in subscription businesses!) and try a big new competitively priced service instead. A couple of quarters later, we believe we’ll see the playing field become more balanced, with the vast majority of Netflix’s subscribers keeping their service while many of Disney Plus’ new subscribers will be adding it as their second streaming service.

The bigger impact to the entire market will be that the surge of streaming service options, each with its own package of unique content, will finally kill cable television service model. If for $25-40/month you can get Netflix, Hulu, Disney Plus, ESPN Plus and Amazon Prime video, who will keep cable TV? This will free up $100/month of video spending for most households and, while Disney and others will certainly win some of that, we believe Netflix will remain the default service and the de facto leader while the traditional cable companies’ ongoing businesses will be to supply the broadband pipes connecting them.

“The Force is strong with this one.”

Despite its scale and leadership advantages in streaming video, Netflix isn’t sitting still. They are taking their large US profits and reinvesting in dominating international markets where they are far ahead of everyone else. This makes the company look less profitable overall since they grow via income statement spending (outsized content and marketing budgets), not capex as a physical assets company traditionally would have. And though its international business just turned the corner on profitability, we believe it has a long way to grow as the US market has done. Longer term we expect they will raise prices in their international business just as they have successfully done in the US .

At today’s $16/month for their top tier service with four 4K simultaneous streams, people can share the service and pay as little as $4/month each (or subscribe separately to a single mobile stream in some emerging markets like India), which is a bargain for all the billions of dollars of great content they get access to so affordably and conveniently. However, the fixed cost nature of content makes each of even the lowest priced marginal subscribers very profitable and their aggregated spending continues to feed the Netflix content engine that benefits all existing subscribers, even as they scale the add grows the Netflix’s overall margins. 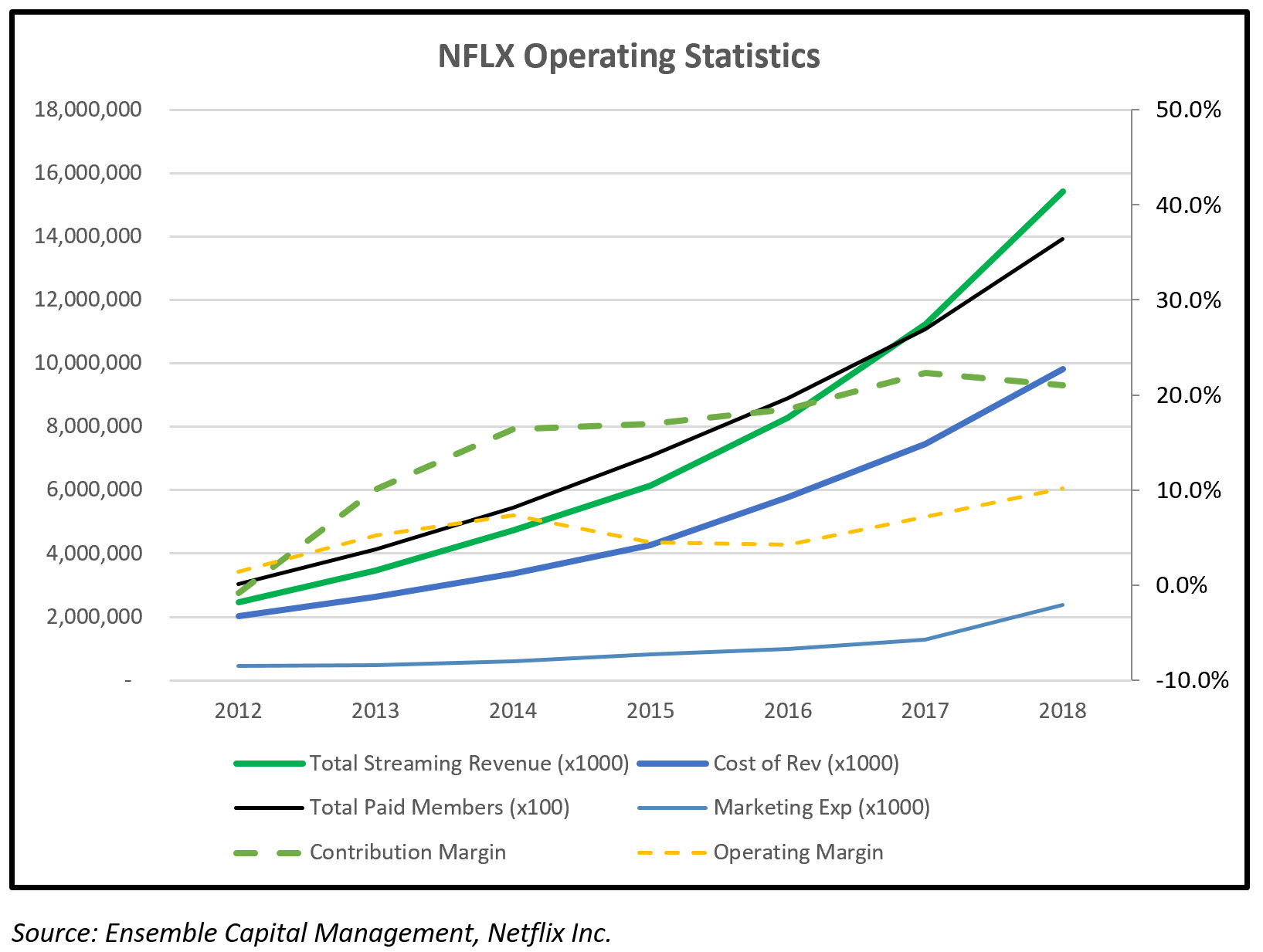 “You can’t stop the change, any more than you can stop the suns from setting.”

So bottom line: we do think competition is ramping up and Disney will be successful, but we never expected that the other media players would fail to compete forever. The fact that they are now recognizing that Netflix has successfully pulled the rug from under their businesses and must be copied doesn’t change our positive view on the company, especially since we believe it is far ahead of the competition on its ability to recruit and retain subscribers, source a variety of locally and globally relevant content, and access deeper into the global market with local partnerships, and most importantly, its culture of customer focus and innovation.

Netflix has already grown to become a global scale media company, so the onus is on the competition to execute and invest billions (in the form of losses for years) in order to do the same to be viable long term competitors.

For more information about positions owned by ECM on behalf of clients as well as additional disclosure information related to this post, please CLICK HERE