Looking for the Next ROIC Machine

Do not go gentle into that good night. Rage, rage against the dying of the light. – Dylan Thomas

What do we say to the god of death? Not today. – Game of Thrones

Financial theory tells us that eventually a company’s returns on invested capital (ROIC) will decay toward its weighted average cost of capital (WACC), or discount rate:

Of course, “eventually” can be tomorrow or in 30-plus years.

The difference between days and decades in a company’s competitive advantage period is massive, yet is often overlooked, as Michael Mauboussin and Dan Callahan note:

Despite the unquestionable significance of the longevity dimension (of sustainable value creation), researchers and investors give it insufficient attention.

Why does longevity get ignored? According to New York University Professor Aswath Damodaran, almost 85% of equity research reports are based on some relative valuation metric. In other words, most investors are laser-focused on what might happen over the next few quarters or years. What happens to a company in year five and beyond is of little concern to renters of stocks.

But even if you take a long-term ownership perspective like we do, it’s easy to be dismissive of competitive advantage longevity.

Let’s say you’re building a five-year discounted cash flow model to estimate a company’s fair value, your terminal value (i.e. which assumes the company operates in a defined state in perpetuity) accounts for between 70-75% of your fair value estimate. A huge swing factor.

It’s rational to assume that the good times won’t last forever. As such, prudent analysts will assume some amount of ROIC decay in their terminal assumptions. But, again, the billion-dollar question is, “How long will it take for ROIC to decay to WACC?”

One thing we’ve noticed is that, while companies with top-quintile ROICs tend to fade toward WACC like any other cohort, they often stabilize at a rate still above WACC. Put another way, while it’s unlikely for a 50% ROIC company to sustain that level for decades, there’s a good chance it will still produce ROICs above WACC (say, in the 20% range) for an extended period. Assuming, of course, the company’s moat remains intact. 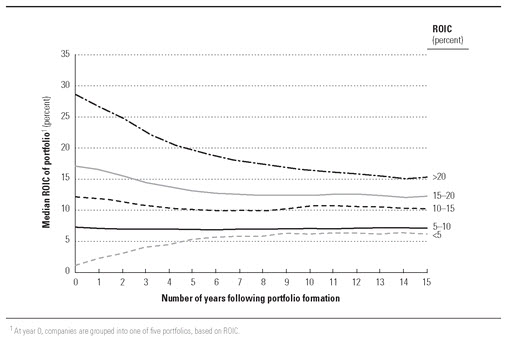 As investors, our job is to compare our outlook with what is already baked into the market price. For example, if you think a company can generate 20% ROICs for two decades, but we conclude the market price already assumes these results, there’s no opportunity for alpha.

But because so many investors are ignoring ROIC longevity, we believe that, on average, market prices expect fade to happen relatively abruptly. To be fair, the market is right to be skeptical of extended competitive advantage periods. It’s the exception rather than the rule for companies to build moats in the first place, let alone successfully defend them for decades.

Those companies that can defend their moats, however, extend their competitive advantage period and require the market to continuously revise estimates higher. Somehow, these ROIC machines cheat natural decay and increase the company’s intrinsic value year after year.

Consider this chart for Fastenal, which stretches back to 1991 and compares its ROIC (shaded) with its stock price (white line). I’ve inserted a red line at 10% to approximate WACC over this period. 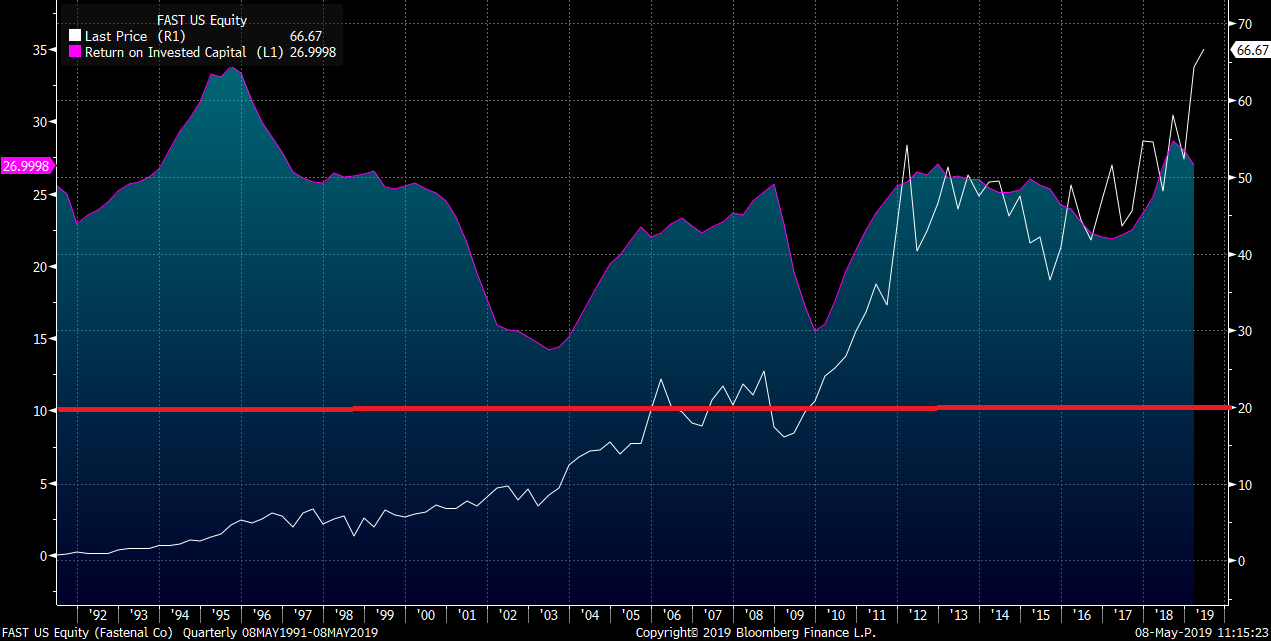 An investor in 1991 might have prudently forecasted 10 years of cash flows and ROICs, with a terminal ROIC approximating WACC. Eventually, someone will compete away Fastenal’s advantages. Right?

So, while the market kept expecting Fastenal’s ROIC to fade toward WACC, it never happened. Consequently, the market had to frequently revise expectations higher, which is reflected in the steadily rising share price (white line).

For some additional examples, here’s 3M: 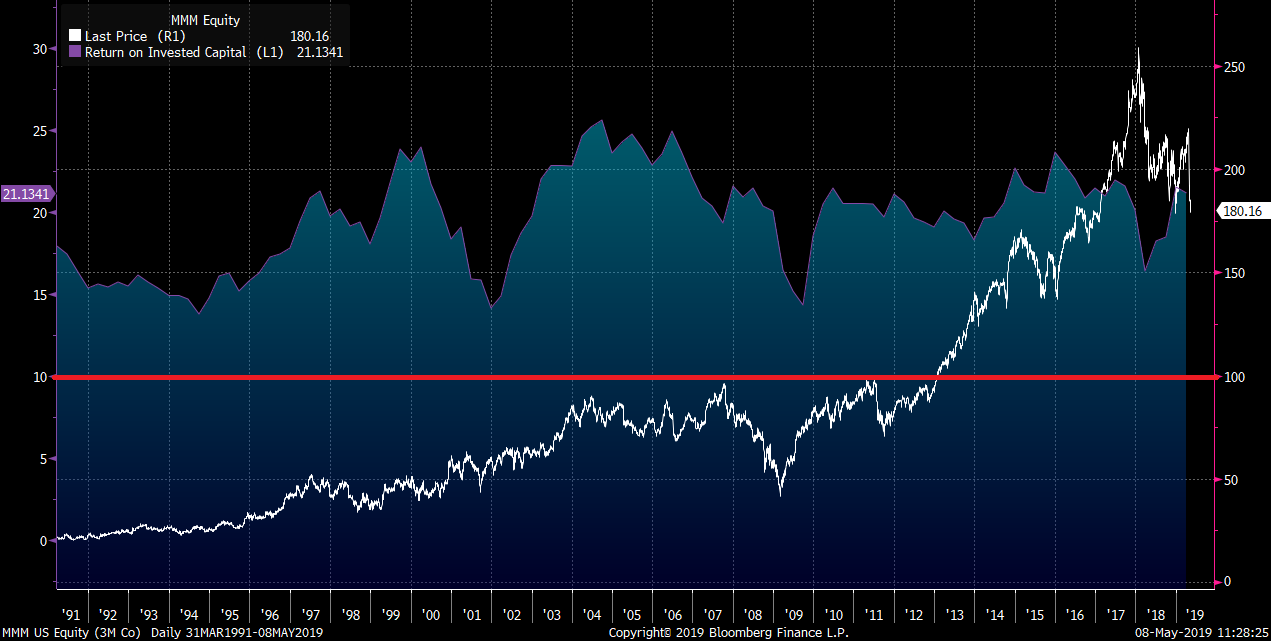 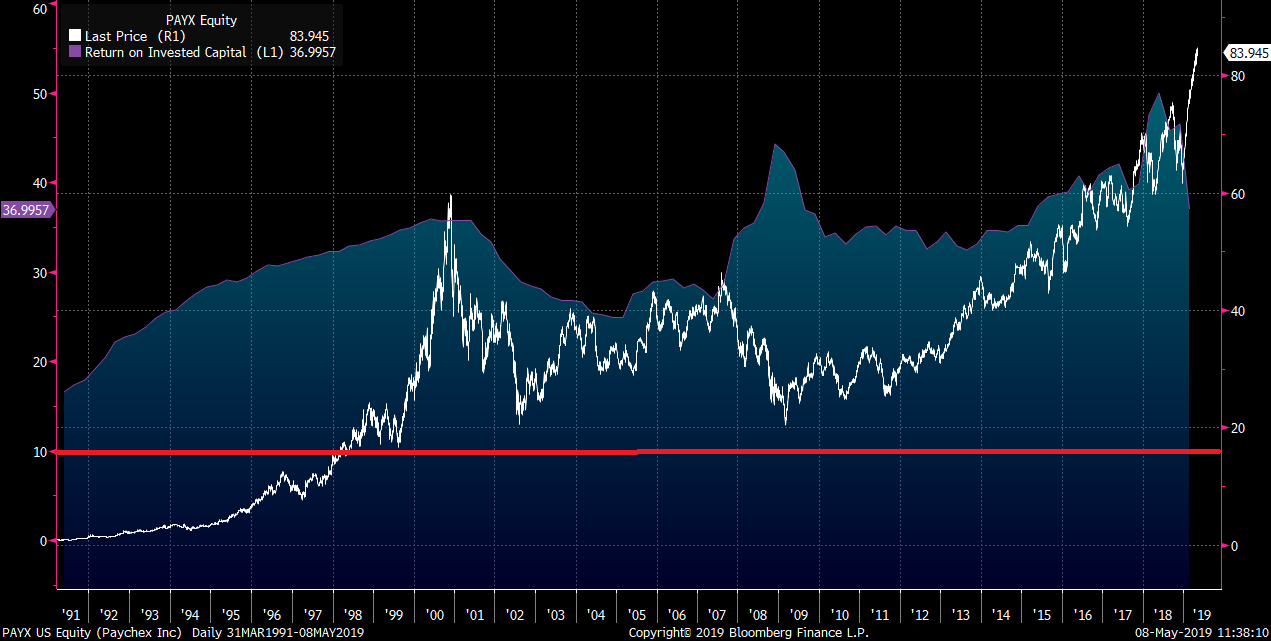 And here’s Home Depot, which despite sharp ROIC decay during the housing crisis, is now producing ROICs well in excess of pre-crisis highs. About as many people expected that outcome as expected Lazarus to rise from the dead. Consequently, the stock price has concurrently and justifiably soared. 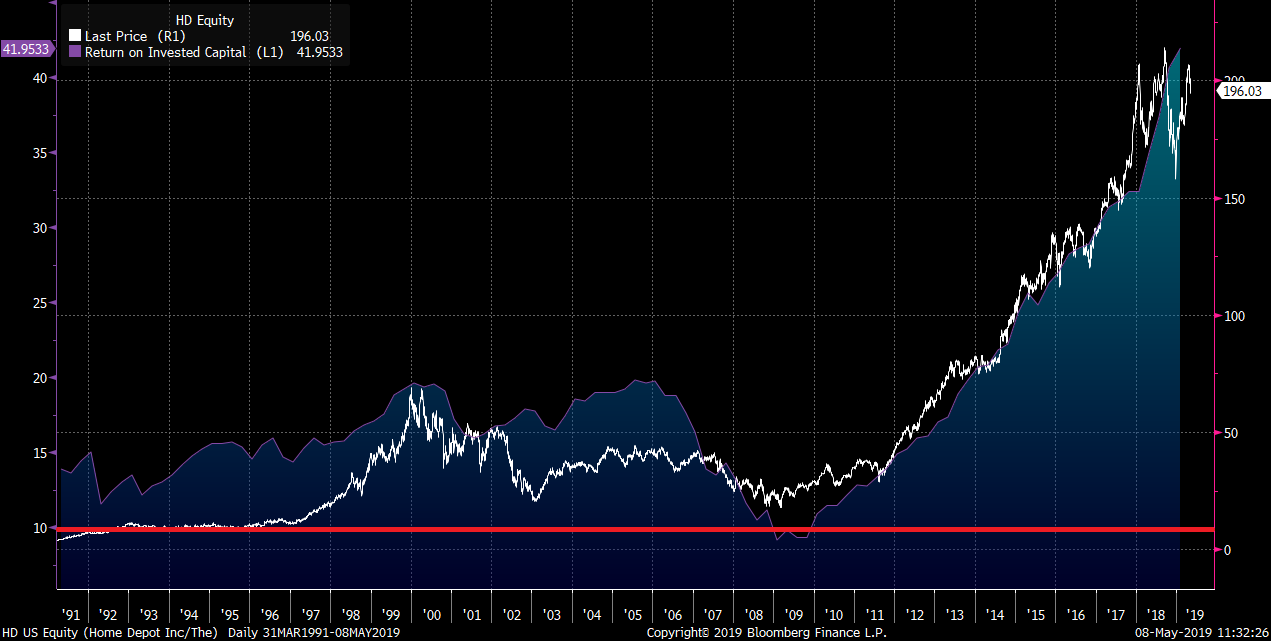 Of course, it’s easy to identify ROIC machines with hindsight. Over the past 30 years, each of these companies has faced controversy, fierce competition, and macroeconomic headwinds. At many points along the way, investors could have talked themselves out of their position – and perhaps quite reasonably.

So, how might we identify a future ROIC machine and have the confidence to hold tight in periods of uncertainty?

First and foremost, we need to find companies with economic moats that can be defended and ideally widened over the next decade. This is no small task, of course. Once we’ve invested, we regularly evaluate the moat to see if it’s widening or narrowing.

Second, we want companies run by engaged management who understand the firm’s advantages and reinvest to strengthen those advantages. Incentives matter, for sure. But beyond that, we want to see thoughtful capital allocation and an intelligent use of debt. Owner-operators are particularly appealing.

Third, we seek companies we consider intrinsically understandable and forecastable. If we can’t fully appreciate the company’s opportunities and risks or we aren’t comfortable forecasting its financials, there’s no way we’ll hold on when times get tough.

Fourth, we seek companies with vibrant corporate cultures that are flexible and like a good challenge, for they will certainly come if the company’s successful. Costco’s ability to survive and thrive in a changing retail landscape is testament to its corporate culture.

Finally, we prefer companies who are value accretive to all stakeholders – not just shareholders. By this, we mean they also positively impact suppliers, customers, employees, and the communities in which they reside. As Professor Vicki TenHaken writes in her book Lessons From Century Club Companies: Managing for Long-Term Success: “Close-knit, mutually-supportive relationships heighten the company’s ability to weather challenges as well as to learn and adapt over time.” In other words, improve longevity.

Here’s Fastenal CEO Dan Florness on this topic: “There’s customers, there’s employees, there’s suppliers, and there’s shareholders. It has to work for all four for our business to be successful short-term and long-term.”

It’s a tall order, but if we can accurately check off these five criteria and pay a good price, we think we stand a good chance at finding and benefiting from the next ROIC machine.

As of the date of this blog post, clients invested in Ensemble Capital Management’s core equity strategy own shares of Fastenal (FAST) and Paychex (PAYX). These companies represent only a percentage of the full strategy. As a result of client-specific circumstances, individual clients may hold positions that are not part of Ensemble Capital’s core equity strategy. Ensemble is a fully discretionary advisor and may exit a portfolio position at any time without notice, in its own discretion