Why We Might Not Have A Recession… For a Long Time

Back in August, we wrote about how the New Normal economy, featuring low growth, that had persisted for a decade might be coming to an end. We featured a chart in that post highlighting how US economic growth during the first half of 2018 had accelerated to the highest rate since prior to the financial crisis. The chart below is a long term version of that data, which shows year over year nominal GDP growth over the past 30 years. 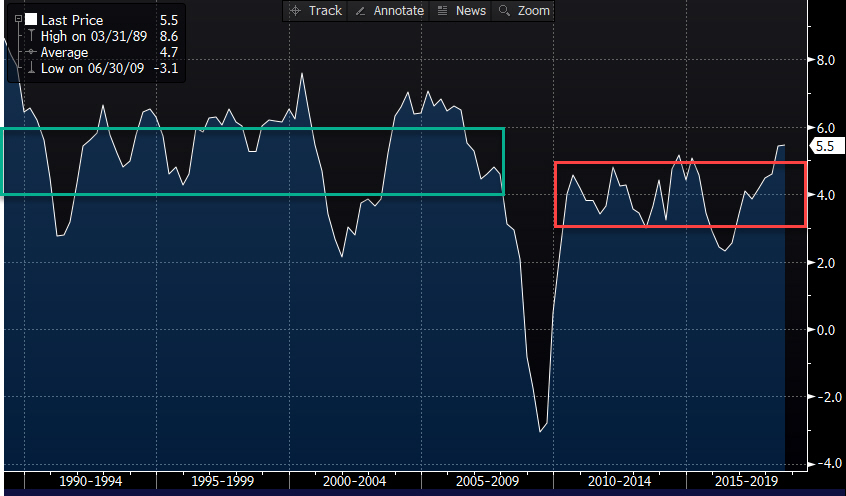 If the New Normal is the new sustainable economic growth range, then the strong recent growth may be unsustainable and thus a recession may occur soon. This is why recent recession fears, despite not yet being supported by much in the way of data, are valid.

But if the Old Normal is returning, then the current rate of growth is still within the sustainable range and we’re likely some time off from a recession. In fact, we may even need to grow above the top of the Old Normal range for a number of years in order to back fill the years of sub-normal growth we experienced during the New Normal period. That output gap is substantial and can be seen in this chart. 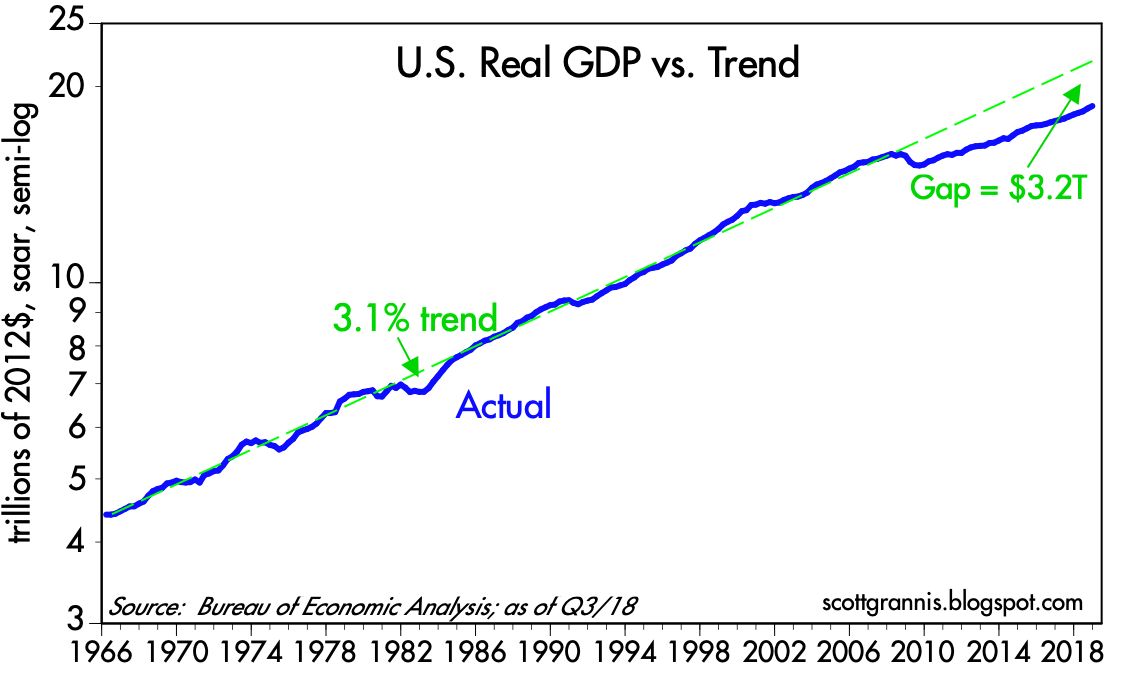 If this optimistic outlook is correct, the next recession may be many years away. But investors need to always ask “why” a trend is behaving the way it is. If the New Normal represented a temporary trend, why did it happen and why would it be fading?

As we discussed in our first post on this subject, research shows that almost all financial crises in history have been followed by sustained periods of sub-normal growth. This is mainly because there is so much debt to work off that rather than paying down debt during the recession and being able to lever back up during the recovery, after financial crises, consumers and businesses are stuck paying down debt loads for a long time. Research shows that on average, about 10 years after a financial crisis, the old growth trends reemerge and in fact it has now been 10 years since the US and Global financial crisis.

One way we can see the repairs made to the US economic engine is by observing employment trends. The jobs report released this morning was very strong and represented the 100th month of consecutive jobs gains. But under the surface, something even more interesting is happening. People who have been out of the workforce entirely for the last decade are returning. Known as the “participation rate”, in recent years the percentage of people who wanted to work has been abnormally low. Some of that is due to aging demographics, some of it has to do with cultural changes, some of it might even have to do with the methamphetamine epidemic or the popularity of immersive video games. But part of it might be that the economy was so weak that some people decided it wasn’t even worth looking for a job. 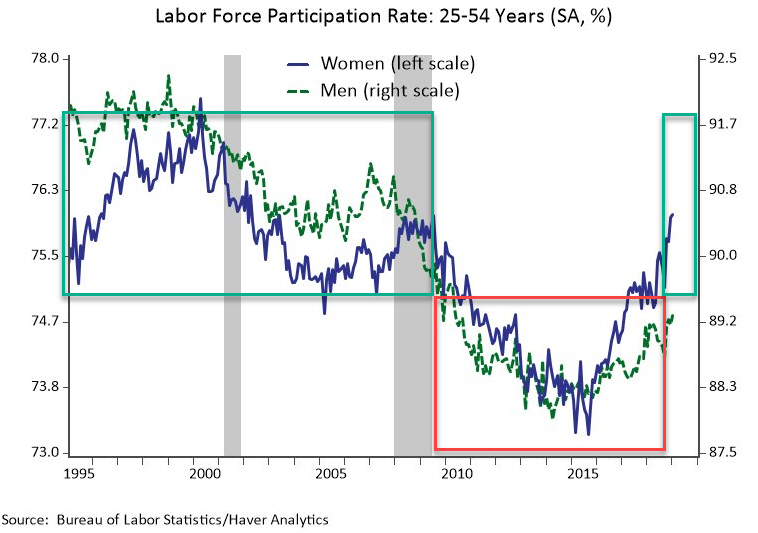 As you can see, female participation has only just recovered to average Old Normal levels while male participation rate would have significant improvement still to come if indeed we’re headed back to the Old Normal. In thinking about “why” the New Normal may not be “normal” at all and instead have been a temporary (although painful persistent) result of the financial crisis, the behavior of the participation rate may be one of the best explanations. If that’s correct, then in the years ahead tracking this metric will be just as important as tracking the number of new jobs added each month. New jobs represent more people adding to economic growth, while the participation rate helps measure the amount of “gas” is being added to the economic “tank”.

At Ensemble Capital, we don’t spend much time trying to predict short term economic activity. We think there is little evidence that anyone can do this well, so we spend our time on more productive activity. But we do spend a lot of time thinking about what are the right long term economic trends that we should expect our portfolio holdings to be operating within. It isn’t so important to try to guess what rate the economy will be growing at next quarter, but it matters a lot if GDP growth averages 4% or 5% over the next couple of decades. Just check out the size of the output gap in the chart above from just 10 years of lower growth.

But while the future is difficult to predict, the behavior of the economy over the next year or two is going to likely “settle” the Old Normal vs New Normal debate, at least temporarily. If a recession occurs, it will be difficult to argue that for some reason the Old Normal is going to return over the long term. But if a recession does not occur, economic growth persists in the Old Normal 4%-6% range where it is currently running, and the participation rate keeps increasing, it will become increasingly difficult to argue that for some reason the economy has to slow back down because it will become apparent that this 4%-6% growth rate is not an “overheating” economy at all but instead is just normal.