Talking About the Millennial Generation

People try to put us down
Just because we get around
Things they do look awful cold
I hope I die before I get old
-The Who (My Generation, 1965)

One of the narratives driving stock price behavior over the last decade has been the idea that Millennials are fundamentally different from past generations and that their different preferences will drive different consumer spending patterns. This is an important concept to wrestle with because consumer spending is 70% of the US economy and where exactly consumers focus their spending can radically change the fortunes of different industries and companies.

In general, the narrative about Millennials has been mostly negative. They live with their parents, they eat too much avocado toast, they aren’t interested in growing up and so they aren’t buying cars and houses and the other trappings of adulthood. But we believe that for the most part the negative narrative is partly just older people complaining about young people the way they always do (see The Who’s My Generation, a hit song over 50 years ago) and partly a function of Millennials’ reaction to the Financial Crisis.

Much as Depression Babies had fundamentally different spending behaviors due to coming of age in the Depression of the 1930s, it is perfectly reasonable to think that those young adults who came of age in the wake of the Financial Crisis might have distinct spending patterns. Importantly, these spending pattern deviations will be strongest in the short term after a crisis and fade over time, as new life experiences are laid over the memories of the Financial Crisis. 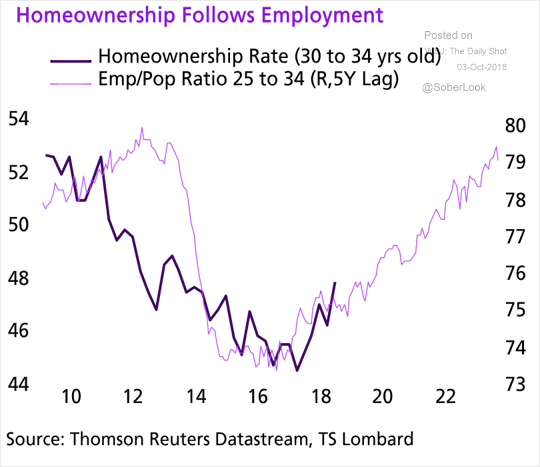 What we see here is that basically all of the reduction in demand to buy homes for Millennials is due to the difficulty they faced in getting a job due to entering the work force in the middle of the worst economy in a hundred years. It is easy to paint a picture of Millennials wanting to live in apartments and take Uber everywhere and not have kids and refuse to grow up. But the data suggests that this generation is just paying the price of the economic disaster they were bequeathed with. Since we know that the percentage of people in this age bracket that have a job is up considerably from where it was five years ago, it is very likely that over the next five years this age bracket will be buying homes at much higher rates than they have in recent years.

What about cars? Aren’t Millennials all childless, city dwellers who ride around in Uber? Here’s a string of quotes from a report out of University of Pennsylvanian’s Wharton business school.

“Millennials, the boomers’ children, have seemed far less interested in cars than their parents… But it turned out that the concern was largely misplaced. According to an article in Wards Auto, the weak sales were less a reflection of the generation’s attitudes toward cars and more the result of the Great Recession and the younger generation’s lack of resources… too many have mistaken the presence of millennials in cities as an indication that they prefer urban living. According to the 2016 National Association of Realtors Home Buyer and Seller Generational Trends study, a growing share of homebuyers are millennials, and more of them are purchasing single-family homes in suburbia.”

Here’s NPR with a similar take in an article titled “As Millennials Get Older, Many Are Buying SUVs To Drive To Their Suburban Homes”:

“As millennials get older — and richer — more of them are buying SUVs to drive to their suburban homes… Generationally speaking, the stereotype of millennials as urbanites falls flat when it comes to homeownership… And how are millennials navigating the suburbs? With SUVs, according to several recent studies… Millennials just might be mainstream after all.”

But wait, aren’t Millennials blowing all their money on avocado toast and frivolous travel that they document on Instagram? Whatever happened to buying tons of branded stuff to show off how successful you are like the Baby Boomers did? Well, while it might be easy to poke fun at Millennial consumption patterns, it is just as accurate to say that they are the least materialistic generation of the post war period. Avocado toast, travel and social media use seems frivolous? How about eating healthy, prioritizing experiences over stuff and spending your time engaging with your peers as well as the wider community of which you are a part?

At least we know Millennials are wasting their time playing video games right? Isn’t that solid evidence that they aren’t maturing into adults and that us older people are justified in complaining about their lack of work ethic? Well… How does spending every waking moment preparing to live and work in a digital economy sound? You think the military drone operators would be as good if they hadn’t played video games? Studies show gaming is a critical training activity for the modern military. How about surgeons who will spend their career manipulating robotic surgery tools like those produced by Intuitive Surgical? Studies show surgeons who have a history of playing three or more hours a week of video games committed 37% fewer errors and completed surgery 27% faster.

My teenagers type incredibly fast. The difference between their typing speed and mine is most noticeable on touch screens. Today, we dismiss that because we don’t take texting as a serious communication system. But as we move into a world where keyboards fade in relevance, older generations are going to be at a significant disadvantage against the younger generation. Just as corporate employees in their 60s and older tend to type slowly on a keyboard compared to Gen Xers who learned to type in school, I’m certain that as computing interfaces shift away from keyboards and mouses towards touch screens, voice and even augmented reality, us “olds” are going to suddenly realize that the time young people were spending on their phones and playing video games was actually an advanced, intensive training regime preparing them for their future jobs.

None of this is to say that the Millennial Generation will end up being clones of past generations. They are the most educated generation, many went to grad school pushing off employment until later in life and then needing to pay back student loans. That forced them to (responsibly) delay the phase of life where you get married, have kids, and buy a house, ie what is considered “growing up”. But they do have unique preferences (as all generations do). We feel certain they will eat healthier, travel more, be less interested in materialistic consumption and more interested in experiences (which they may well keep documenting on Instagram as their own version of social status signaling). A whole range of other preferences will also emerge over time as well, some positive and some negative. Some will fade as they get older and others will strengthen into defining characteristics.

As we look at the last decade of New Normal weak growth and observe the increasing rate of growth being experienced today, the key question to answer is whether the last decade was a drawn out hangover from the great recession or if something fundamental has changed. In thinking about Millennials and how their economic decisions compare to past generations, we’re solidly in the camp that people are people, their hopes and dreams and fears may change, but at the end of the day, they are striving for the same core life outcomes that past generations pursued.

The Millennial cohort saw the first decade of their working lives sidetracked by the foolish decisions of their elders. As the economy gets back on track, we expect the economic engagement of this cohort to rise considerable, creating a material tailwind to the economy from their pent up demand.