“We’re a long way from neutral at this point… probably”

And since then, financials markets have done this: 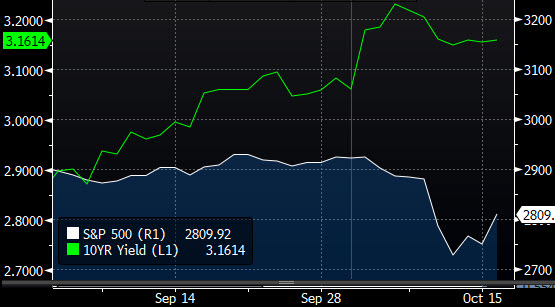 The red line shows the date of Powell’s interview. The green line shows the 10-year treasury yield spiking to its highest level since 2011. The white line shows the S&P 500 selling off. Now, any good market analyst knows that markets are constantly reacting to many different inputs and it is impossible to completely attribute market movement to any one single data point. But while this is true, we think Powell’s statements were the key catalyst for the recent shifts in financial markets.

At Ensemble we don’t make investments based on the idea we can predict the next big move in the economy. Despite having a degree in economics, I don’t believe that economic predictions can be systematically applied to produce outperformance in an equity portfolio. But we do think it is critical for equity investors to be economically “context aware.” By “context aware” I mean to understand the range of potential economic outcomes and the probability that economic conditions (to the degree they drive company level performance) are running above or below what might be considered “normal” over the long term.

So what is the current economic context and why did Powell’s comments trigger such a sharp reaction? Back in August, we wrote about the potential end to the New Normal, a slow growth economic environment, and what may be the reemergence of the Old Normal, a higher growth environment. In that post we showed this chart illustrating how economic growth had recently reached the fastest rate since the great recession. 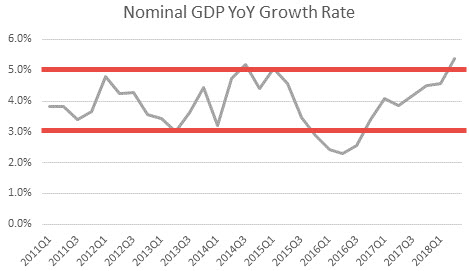 But while we may be returning to the Old Normal paradigm of higher growth, we may also just be experiencing the frothy growth typically seen at the end of an economic expansion. Maybe the New Normal is here to stay and the recent growth spurt will soon end in the midst of the next recession. The fact is, no one knows which one it will be. Even the Federal Reserve, with its myriad resources and access to both public and private economic data, has an extremely spotty track record of forecasting recessions.

It is in this context that Powell’s comment, “We’re a long way from neutral at this point” landed with a thud. The Fed Funds rate is currently at 2.25%. In theory, there is some interest rate that would be considered “neutral”. This is the rate that would be neither stimulating nor inhibiting to economic growth. Economists call this mythical number r*. But while r* exists, it is not a rate that is observable or objectively measured. In a very real sense we can only know what interest rate was actually neutral by looking in the rear view mirror at how the economy behaved in relation to various interest rates in the past. But what makes economics so difficult is that it is not a static science, but instead is a highly dynamic system. A rate that may have been neutral in the past may stimulate or inhibit economic activity today.

What Powell’s comment “we’re a long way from neutral” means is that the Fed chairman thinks that the current Fed Funds rate is still stimulative. Put simply, he thinks the economy can continue to expand even as the Fed continues to raise rates. How much further might rates need to rise? Well, Powell seems to think the answer is “a long way”. But the market isn’t so sure he’s right and if in fact interest rates are already near neutral, then raising rates a lot from here would start inhibiting economic growth and quite possibly tip us into the next recession.

Here’s a chart showing what members of the Federal Reserve believe the Fed Funds rate will be in the years ahead (each member’s estimate is a yellow dot with the green line representing the median), along with market estimates of of the same rate (the purple and white lines). 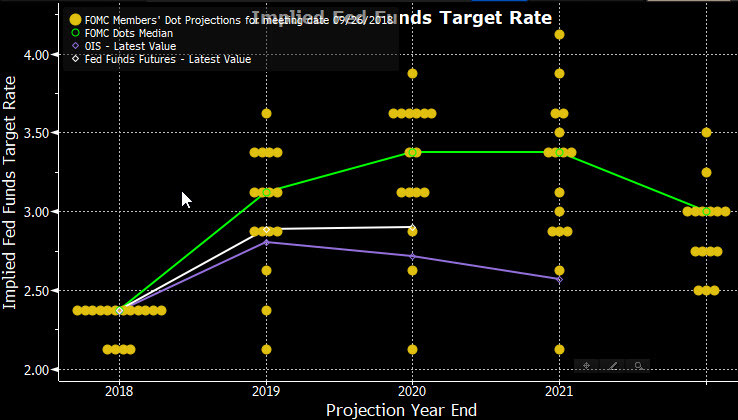 The Fed thinks they will raise rates by about 1.25% over the next two years to 3.5% before fading back towards 3% or what is essentially their best estimate of the neutral rate. Financial markets on the other hand are forecasting that after raising Fed Funds by about 0.5% next year, the Fed will have already gone too far and will begin cutting rates back towards about 2.5%, which is essentially the current market forecast of the neutral rate.

So while Powell’s statement “we’re a long way from neutral” doesn’t sound that dramatic, in many ways they are a double dog dare to the markets letting investors know that he does not agree with the market’s view on rates or its implied view that the economy is too fragile to survive higher rates. His statement is bullish on the economy (it means Powell thinks the economy is more robust than the market is giving it credit for), but it also exposes the fact that if the Fed is wrong and the economy is indeed still stuck in a New Normal environment of lower growth, and thus a lower neutral rate, that the Fed might be making a mistake and planning on driving rates too high and triggering the next recession.

We’re nine years into this economic expansion. Another recession is coming (they always are), but investors don’t know when. Like market pullbacks, they are an inevitable part of the cycle, but timing them correctly is near impossible. But while there are many possible futures for the economy, two distinct narratives are coming into focus with the market struggling to price them both in since they lead to quite different outcomes over the next couple of years.

The Old Normal Returns: Under this narrative, the economy has struggled through a ten year period of recovering from the financial crisis, but it has finally worked off the hangover and is now ready to support stronger growth and higher interest rates. In Fed speak, the neutral rate is likely near 3% or higher. While this view is not the consensus view, current economic growth is already running at Old Normal levels and the economist Mohamed El-Erian who literally coined the New Normal phrase said recently that he believes the US economy has exited the New Normal and is reentering the Old Normal paradigm.

The New Normal Persists: Under this narrative, the economy is coming to the end of a long expansion, it can’t handle much higher rates. In Fed speak, the current Fed Funds rate is already very close to neutral. While this has been the consensus view and overall the market is still primarily pricing in this outlook, over the past two years economic growth, inflation, interest rates and equity market valuations have all been trending higher suggesting the market is beginning to question if the New Normal is really here to stay or not.

I wish I could tell you we knew which narrative is right. But what I can tell you is that any investment professional who tells you they do know with certainty which way the economy is going to turn is fooling you and themselves. Which is why it is important to point out that Powell’s full quote was “We’re a long way from neutral at this point… probably.” In other words, Powell isn’t so committed to his view that he is going to ignore new economic data as it comes in. What this means is that with market views on the economy at a cross roads, the market will likely be hypersensitive to new economic data as it rolls in. Does it support a narrative of a return to the Old Normal or does it reinforce market perceptions that the New Normal is here to stay?

You might call this the Three Trillion Dollar Question. $3 trillion is the difference between the current size of the US economy and the size it would have been if economic growth after the great recession had returned to the Old Normal growth rate rather than growing at the slower New Normal rate for the past decade. 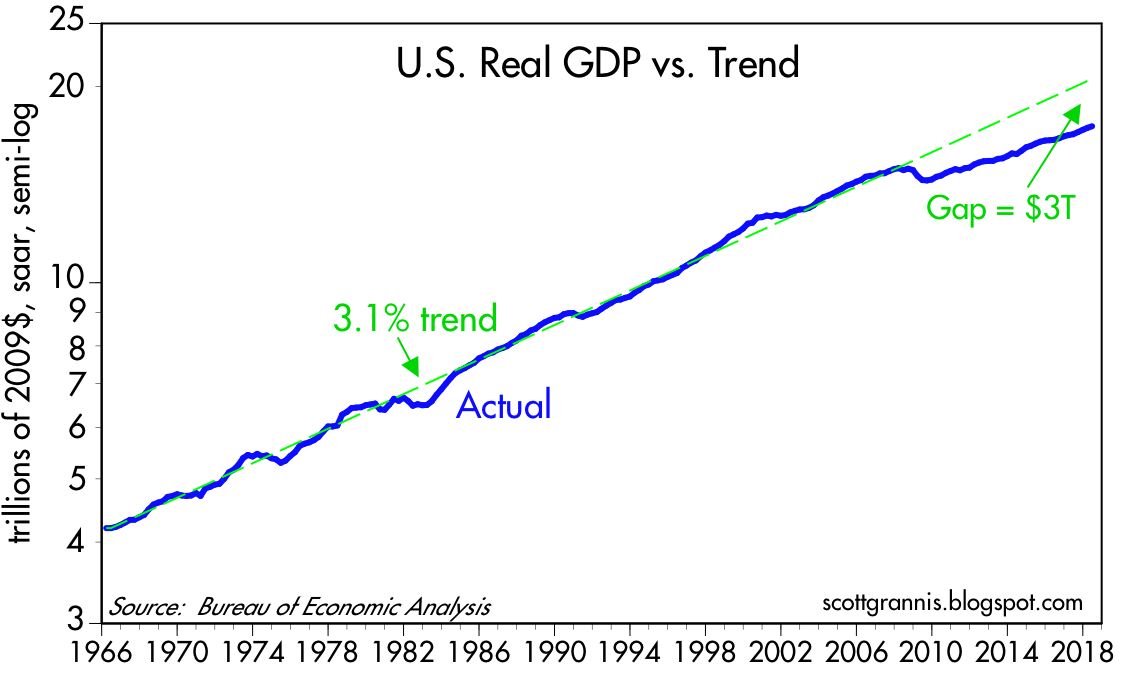 The market is currently estimating neutral at around 2.5%, maybe even lower. The Fed is telling us they think it is about 3% or maybe a bit higher. But under the Old Normal, the best estimate of the neutral rate was something around 4% (all estimates assume 2% inflation). If you ask me, the Fed’s official projection of 3% for the neutral rate doesn’t quite square with Powell’s comment that “we’re a long way from neutral”, as 3% is only 0.75% above the current Fed Funds rate. So while suggesting neutral might actually be as high as 4%, that GDP growth could sustainably run at 5%, and that 10-year bond yields might hit 5% as well would put you far out of consensus, this is actually the pre-financial crisis “normal” that persisted for a very long time. Maybe Powell’s “long way from neutral” comment is a first step to suggesting the Old Normal can truly return.