When Dividends are a Problem

Over the past decade, three factors changed the game for dividend-paying companies.

As a result, it’s essential that investors keep a close watch on their companies’ financial strength, competitive position, and capital allocation practices. While dividends can represent a commitment from the board of directors, they are never guaranteed.

Blue-chip consumer packaged goods (CPG) stocks have long been steady dividend payers. Indeed, Kimberly-Clark, Procter & Gamble, and Colgate-Palmolive are members of the “Dividend Aristocrats” list for having raised their annual payouts for over 25 consecutive years. The group also broadly avoided dividend cuts during the financial crisis due to regular demand for their everyday consumable products like tissues, toothpaste, and laundry detergent.

More to the point, these impressive dividend track records were made possible by the CPG companies’ brand- and scale-based economic moats.

But moats are not static – they are either widening or narrowing each day – and management’s capital allocation decisions play a massive role in determining moat trends. Unfortunately, it seems many CPG firms focused too much on returning capital and not enough on reinvesting it.

In the last ten years, CPGs have been particularly impacted by technology, which lowered both barriers to entry and barriers to scale. The Honest Company and Dollar Shave Club are just two examples of companies born after the financial crisis – both in 2011 – that quickly challenged the old guard.

Finally, the rise of online shopping – primarily via Amazon – moved consumer dollars away from grocery stores where CPG firms had the best shelf space to a platform where the customer has many choices.

These factors are starting to show in CPG financial results and are reducing dividend safety.

As the following chart shows, earnings cover (earnings/dividend) has declined significantly at Kimberly-Clark, Procter & Gamble, and Colgate-Palmolive over the past twenty years. 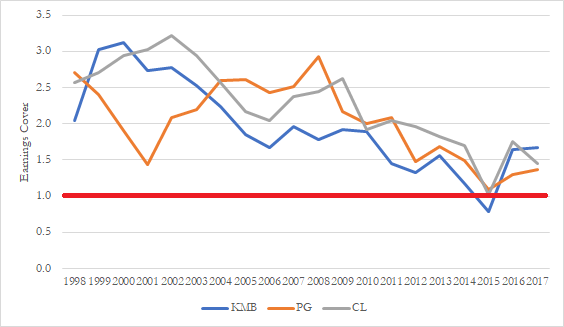 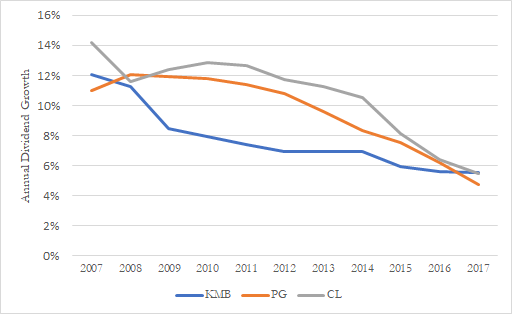 Each company has also made regular share repurchases on top of their dividend payments, leaving little – if any – free cash flow left over to fund acquisitions or fuel innovation.

Source: Bloomberg, as of April 25, 2018. Based on latest trailing twelve-month figures.

Yes, all else equal, you should expect maturing companies to pay out a higher percentage of earnings and cash flow, but things are not equal in the CPG world. The CPG companies will either need to find a way to make their traditional business models work in the new landscape or revamp their strategies to address competitive threats.

As P&G alumnus and venture investor Dave Knox notes in his book, Predicting the Turn: The High Stakes Game of Business Between Startups and Blue Chips: “The companies which remain on the Fortune 500 ten years from now will be the companies that leverage a mixture of tech acquisitions, investments in startups, innovative partnerships and even their own disruptive launches to transform their companies. While it will not be a single strategy that enables their survival, it also will not be a single effort.”

If true, this will require both a cultural change and a change in the way the firms allocate capital.

Ultimately, companies cut their dividends for one or some combination of three reasons:

Kimberly-Clark, Procter & Gamble, and Colgate-Palmolive all have excellent credit ratings and shouldn’t run into any trouble with creditors. But a strong credit rating alone doesn’t mean a safe dividend. Pfizer and General Electric, for instance, both carried top-notch credit ratings when they cut their payouts during the financial crisis.

The CPG firms could technically afford their payouts for some time by issuing debt or selling assets, but this is not a sustainable strategy and may deprive the companies of future earnings power.

If blue-chip CPG firms cut their payouts, it will likely be because they feel “handcuffed” by the commitment of capital to dividends, which restrict their ability to compete and defend their moats.

Dividend cuts by blue-chip CPG companies would be wildly unpopular among investors who rely on the companies’ dividends to supplement their income. The companies will also be reluctant to break their multi-decade dividend increase streaks, as they would drop off popular dividend-based indexes. As such, I do not expect such a decision to be taken lightly.

Management’s goal should be to optimize capital allocation to improve return on invested capital and create long-term shareholder value. The ability to sustain a dividend springs forth from smart capital allocation decisions that defend or widen the company’s moat.

Dividends can indeed play an important role in capital allocation by limiting management “empire building” risk, but generous dividend policies can also be a problem when they become burdensome. Efforts to sustain an unsustainable dividend come at the expense of long-term shareholders. In the coming years, CPG firms may have some tough decisions to make.