Why We Didn’t Invest in This Good Business

For us at Ensemble, firms that consistently generate low returns on invested capital (ROIC), have no discernable economic moat, or have a shaky balance sheet are quickly ruled out from consideration.

What’s more challenging is deciding between good and great businesses. In addition to current portfolio holdings, we’re continuously vetting businesses for potential inclusion in our portfolio. Most of these are already good companies, but they still may not pass all of our tests.

To illustrate, the types of questions we want to answer before committing your capital are:

Today, I’d like to walk you through an example of a good company we recently researched but decided not to pursue as an investment.

The company is Ecolab, a $40 billion specialty chemicals firm best-known for its legacy cleaning and sanitation offerings. Ecolab’s legacy business operates with a “razor-and-blade” model: it rents cleaning equipment to customers like hotels, restaurants, and long-term care facilities and then sells the proprietary chemicals used in the equipment. This brilliant model produces high levels of recurring revenue and cash flows that have supported 26 consecutive years of dividend increases.

In 2011 and 2012, however, Ecolab made two transformative acquisitions that impacted its moat – negatively in our opinion. The first was Nalco Holding, a water treatment business serving the mining, energy, and paper industries. The second was Champion Technologies, a specialty chemicals company that produces water treatment for oil drillers and products that prevent oilfield equipment corrosion. I’ll address these acquisitions in a moment, but want to start with the legacy cleaning business, now primarily housed in the Institutional segment. 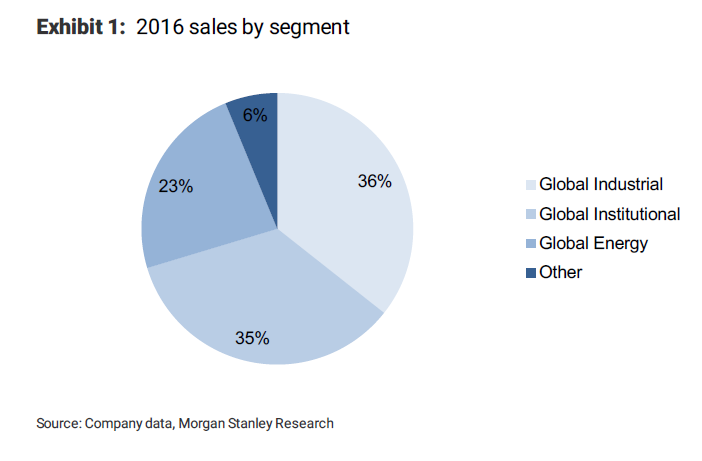 Integral to Ecolab’s moat in the Institutional segment is its direct sales force that provides customers with “high touch” relationships. Not only are these relationships hard to replicate, but no competitor is remotely close to matching Ecolab’s 26,000-plus salesforce. Ecolab estimates this figure is two-to-five times larger than any competitor’s.

The Ecolab salesperson will pitch the customer on how Ecolab’s solutions will help them save money on chemical, water, and energy use over time. The long-term savings is a critical selling point as Ecolab’s products are more expensive. As we’ll see in a moment, this factor might limit Ecolab’s growth.

Once Ecolab is in the door, it becomes much easier for the salesperson to cross-sell additional Ecolab products. The company has a robust research and development budget that drives innovation to support the salesperson’s efforts to “Circle the Customer.” The more products and services Ecolab can place at its customers’ facilities, the stronger its switching cost advantage becomes.

Institutional’s core customers include Fortune 500 foodservice, healthcare, and lodging firms, as well as universities and government agencies. The reputational cost of infections, foodborne illnesses, and unsanitary conditions at large institutions is a positive secular trend for Ecolab. 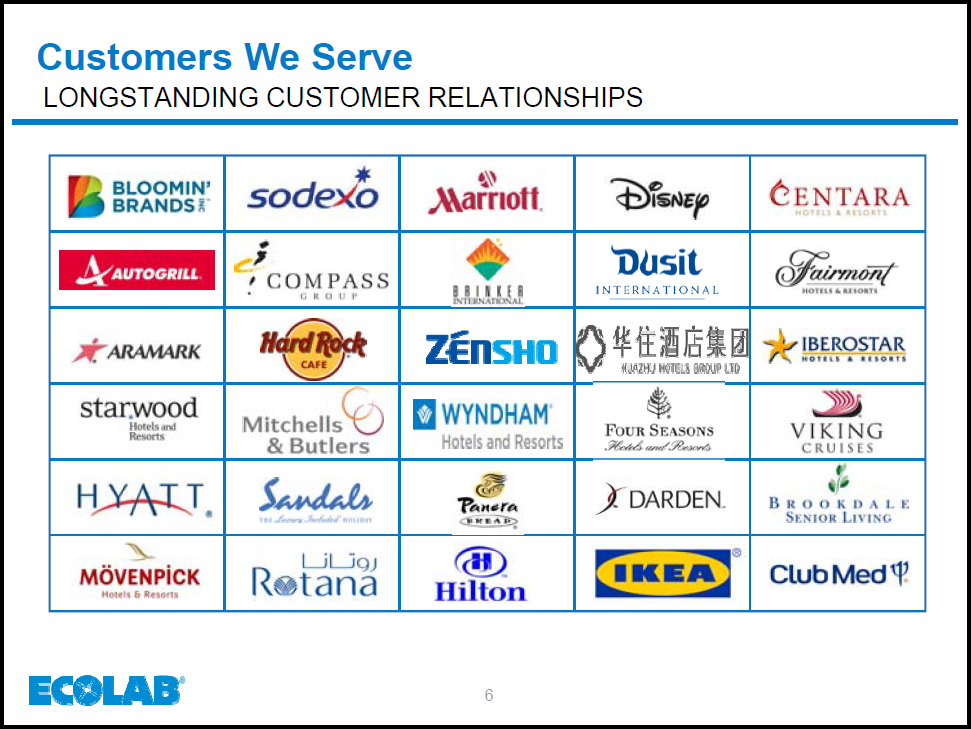 Finally, Ecolab benefitted mightily over the last 10-20 years from inept competition. Its main competitor for North America institutional cleaning business is Diversey, which was most recently sold to Bain Capital in 2017 by Sealed Air. This was the FIFTH TIME DIVERSEY HAD BEEN SOLD in the previous 21 years.

As a consequence of being passed around like a hot potato for two decades, Diversey’s strategy was inconsistent. Ecolab capitalized on many of Diversey’s mistakes.

Big fish in a small(er) pond

At first glance, Ecolab’s Institutional segment looks good. We did have some concerns, however.

Ecolab’s presentations imply that, while they have the biggest market share in the institutional cleaning industry, it remains a small slice of the overall pie. One might think that data point implies a long growth runway, but it doesn’t tell the whole story. 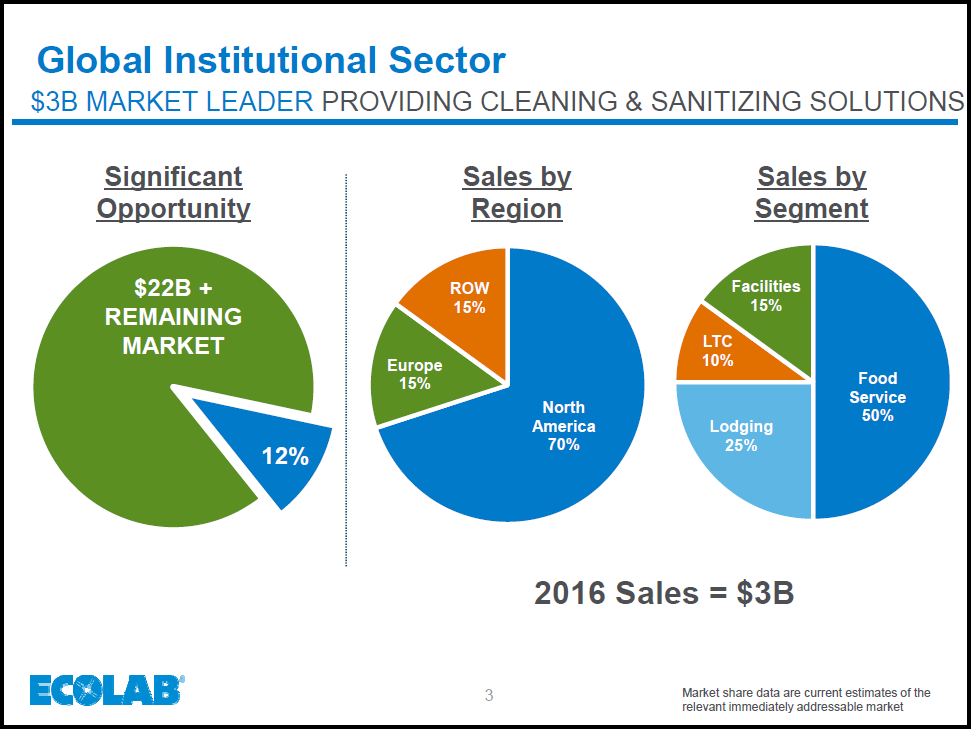 Ecolab Institutional’s value proposition is most attractive to the national and regional restaurant and hotel chains. In the U.S., ABOUT 52% of restaurants are chains, as are TWO-THIRDS of available hotel rooms. Ecolab has already done quite well in this segment.

Larger customers like that Ecolab can be a one-stop shop and provide a consistent experience across geographies. They’re also more receptive to Ecolab’s multi-year expense saving pitch. An independently-managed single-unit restaurant, on the other hand, tends to run on razor-thin margins. They’re more concerned with saving money right now.

Even though Ecolab’s stated market share is 12%, we think the share of their core addressable market is much higher. As such, we see the Institutional segment as having more of a legacy moat than a reinvestment moat. In other words, it has limited ability to reinvest cash flows into Institutional at attractive ROIC levels.

Each of these factors gave us pause and led us to believe Ecolab’s Institutional moat, while wide today, will likely narrow in the next decade. Even if Ecolab holds onto existing Institutional customers, competition for new customers should intensify. The result could be lower margins and ROIC for the segment.

We further concluded that the acquisitions of Nalco and Champion diluted Ecolab’s overall moat by diminishing the impact of the wide-moat Institutional operations. Indeed, we think the two deals were motivated by growth rather than by ROIC. If that’s the case, it would support our thesis that the Institutional business is a legacy moat with slower growth potential. Otherwise, we would have expected management to reinvest capital that was used in M&A back into the cleaning business.

Before Ecolab’s acquisition in 2011, Nalco’s ROIC was volatile and mediocre. Nalco’s 3D TRASAR system and its embedded engineers at customer sites may provide some switching cost advantages; however, Nalco’s historical ROICs do not clearly reflect these advantages.

Compared to ECL’s pre-acquisition ROIC, you can see some clear differences in the two operations. Nalco’s ROIC was cyclical and likely hovering around its cost of capital. Conversely, Ecolab’s showed steady ROIC well above its cost of capital, even through the financial crisis.

And while the decline in energy prices in recent years is partly to blame, Ecolab’s ROIC has yet to recover pre-acquisition levels. We expected to see more improvement given reported synergies from the deals.

Ecolab is a good company, but it fell short of our definition of a great company. To be sure, Ecolab’s stock price has outperformed the S&P 500 since the end of 2010, so management deserves credit for integration efforts and navigating through tricky commodity and energy markets. That said, our concerns about its moat trend relative to its premium valuation – 30x trailing P/E and 2.8% free cash flow yield – and management’s questionable acquisitions drove our decision to cease further research.