How I Learned About Moats and Joined Ensemble Capital

It’s a pleasure to join Ensemble Capital. I couldn’t have asked for a more welcoming and supportive group of colleagues. I look forward to seeing what the team can accomplish together.

About three years ago, Sean reached out after reading one of my articles. I’ve since learned a lot from the team’s Intrinsic Investing blog and social media posts. With time, it became clear that we shared a core investment philosophy – specifically, seeking companies with durable economic moats.

For my first post on Intrinsic Investing, I want to share how my investment philosophy developed and how it is aligned with Ensemble’s approach.

My introduction to economic moats came through Morningstar’s 2004 book, The Five Rules for Successful Stock Investing, written by Pat Dorsey. As a liberal arts major in college, qualitative business analysis came more naturally to me than quantitative security analysis. The economic moat framework just made sense to me. See this post that Sean wrote about the role of the liberal arts in investing.

Later in my career, I spent three-and-a-half years at Morningstar as a sell-side analyst. While there, I was immersed in the company’s economic moat methodology.

Warren Buffett, of course, coined the term “economic moat,” but Morningstar developed a framework for analyzing them. Morningstar sought shared characteristics of firms that consistently generated high returns on invested capital (ROIC) when the nature of markets suggests that competition should have eroded those returns.

Knowing these moat sources also helps you quickly sort through ideas. If you can’t determine which moat source accounts for a company’s high ROIC, the company probably doesn’t have a moat.

During my time at Morningstar, I led the department’s equity stewardship methodology, which analyzed a management team’s capital allocation skill. More specifically, it looked at the relationship between moat and management. Once we understand the company’s moat source, we can better judge management’s decisions.

Let’s say you think a company has a switching cost advantage. It would be a good sign, for example, to see the firm’s management acquiring complementary technologies or services (at favorable prices, of course) that improve its existing offerings and therefore better attract and retain customers.

On the other hand, management may acquire a firm that doesn’t complement its current offerings. This decision could lead to a narrowing of the switching cost-based moat.

Beyond that, I spend time looking for management personality traits that I believe are common among the top 1-2% of capital allocators. Briefly, I think that CEOs and CFOs who are insatiably curious, can think and act rationally, and behave with integrity are precisely the personality types that you want looking after your investment.

A few months ago, I summarized my investment philosophy on a single page and shared it on Twitter. Unexpectedly, it went viral in the FinTwit (aka Financial Twitter) community, reaching over 117,000 Twitter users. 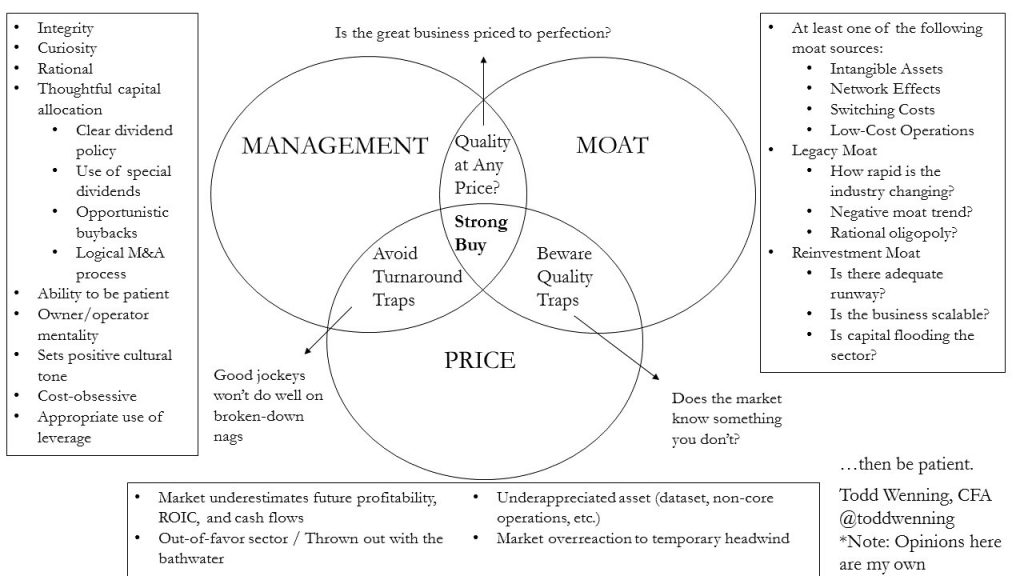 My goal was to have a graphic to help me stay focused on the right type of companies. It’s also led me to dig deeper into situations where only two of the three factors – moat, management, and price – were present.

For example, if management and moat are present, but the stock seems expensive, I need to consider how I might be underestimating the business (i.e., optionality) and be on guard for quality traps.

Just a few weeks on the job, I’ve already learned a lot from Sean and Arif. Their passion for finding and investing in top-shelf companies is energizing. The three of us speak the same language when it comes to moat analysis, and each person has unique experiences that make the team stronger together than we would if we were each working alone.