For much of the past seven years, various stock market pundits have been declaring that the stock market is wildly overvalued and headed for a crash. Much like earthquake insurance being easy to sell just after an earthquake, the proclamations of a stock market bubble found a ready audience among investors who had experienced the 2008 stock market crash less than a decade after the Dot-Com bubble. However, while the stock market might be in for a decline of 10% or 20% any time (these sorts of declines happen regularly; note the 15% decline from December 2015 to February 2016), stock market bubbles are not common occurrences and investors who see them around every corner are like the fabled economist who has predicted nine out of the last three recessions.

First, let’s define what we mean by a “bubble” and why it is entirely different from the normal (but often scary) run of the mill volatility that stock market investors must accept in exchange for earning higher rates of returns than low volatility assets typically provide. A bubble is formed when investors bid up asset prices to irrational levels based on an illogically optimistic view of the future or the belief that they can sell the asset to other investors at an even higher price without regard to any fundamental value that is intrinsic to the asset.

The first famous bubble was Tulipmania in Holland in the 1600s.  For psychological reasons that can be difficult to explain (because the very nature of a bubble is illogical) people started buying and trading tulip bulbs and as the fad caught on the price of certain tulips skyrocketed to values higher than the cost of a home. When the bubble popped, again for no particular reason other than the psychological mania running its course, prices of tulip bulbs fell back to pennies and investors who had got caught up in the bubble were wiped out.

Bubbles like Tulipmania, the late 1920s just before the Great Depression, the Dot Com bubble and the housing bubble all tend to be based around an illogically optimistic view of the future that takes hold with investors. While they are illogical, it is difficult for humans to identify them in real time because we are all influenced by the same socio-psychological memes that are causing the bubble in the first place. But in retrospect, bubbles are pretty easy to see.

For instance, here’s the Dot Com bubble illustrated by Jake at EconomPic Data (an excellent blog that’s been illustrating market and economic trends since 2008): 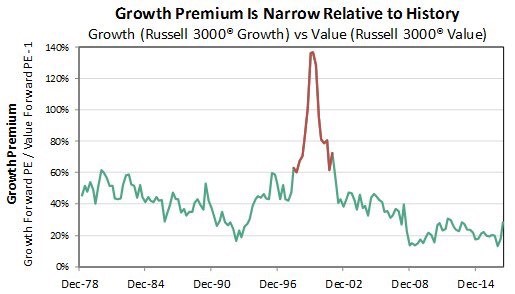 This chart shows the valuation of growth stocks vs value stocks since 1978. You can see that historically growth stocks have sold at relatively small valuation premiums during periods of investor pessimism such as in the early 1990s recession and during the Great Recession in 2008-2009. They’ve traded at higher premiums during more optimistic times. But during the stock market bubble of 1997 to 2001, investors paid irrationally high premiums for stocks with strong growth prospects. While the rest of the 40 year time period showed growth stocks trading at premiums of 20%-60% over value stocks, at the peak of the Dot Com bubble the premium reached almost 140%.

Today, growth stocks trade at a premium over value stocks of just 30%, below their long term average. If you look at the technology, consumer discretionary and industrial sectors, where many growth stocks reside, you’ll find that their current PE ratios are not inflated at all, but instead are just about in line with their long term average levels. It is the stocks of slow growing, conservative, historically “safe” businesses that are driving up market valuations (see this post for a case study of a “safe” bubble stock we wrote last year). 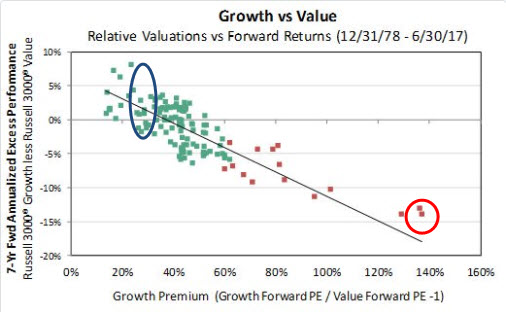 Like the person buying earthquake insurance just after an earthquake, investors are looking at yesterday’s crisis and assuming it will repeat. But that’s not how bubbles work. Bubbles are a mania connected to the psychology of crowds. In the Dot Com era, serious investors came to believe that the business cycle was dead and that we’d never have another recession. That sounds crazy today, but it was one of the irrational beliefs that super charged the Dot Com bubble. Not all stocks went up in value. In fact, even at the peak in March of 2000, many stocks of slow growing “old economy” businesses were incredibly cheap. Today, investors believe in the New Normal, that economic growth will be forever be lower than we’ve seen historically.

Now readers may point to some examples of excitement about speculative investments. We certainly aren’t saying that stocks are cheap or that all growth stocks are good buys. But with growth sectors of the stock market selling at average valuations while “safe” sectors like utilities and consumer staples are trading near all time highs, and bond yields near all time lows, investors are voting with their dollars in favor of slow growth investments, not chasing speculative investments.

This mirror image to the Dot-Com bubble isn’t a coincidence. When bubbles burst they cause the burned investors to promise themselves they’ll never make the same foolish mistake again. In the wake of the Dot Com crash, investors swore off growth stocks and decided they would only invest in something tangible. Something with real value, unlike the paper trading vehicles of Dot Com stocks. Something like… houses.

The stock market crash of 2008 was not due to a bubble in stocks (stock valuations going into the crisis were pretty much right in line with average historical valuations), it was due to the popping of a bubble in home prices and the devastating impact this had on the economy. With their firm commitment to never make the mistake they made during the Dot Com bubble, many investors, with the very best intentions, focused their attention on what seemed like the exact opposite of Dot Com stocks. But like a crowd of passengers all lurching to the other side of a boat in stormy weather, the rejection of growth stocks led to a new bubble forming. Investors were making the same mistake, but because houses felt so safe compared to Dot Com stocks, they believed they were doing the exact opposite of the mistakes they made in the late 1990s.

So with the collapse of the housing bubble, what did investors do? They promised themselves that they would never speculate again and they invested in bonds or just held cash in the bank. Maybe these investments would generate low returns, but gosh darn it they weren’t going to crash… right?

If the natural bubble follow up to the twin crashes of Dot Com stocks and housing is super conservative investments, investors might not experience negative returns when the bubble unwinds. Instead, their loss may just have been the opportunity cost of missing out on the 13% annualized returns offered by the stock market since the end of 2010. Or, if we get a big surge in interest rates, we might well see a selloff in supposedly “safe” areas of the stock market such as Utilities and Consumer Staples.

While “safe” assets aren’t supposed to see sharp losses, they also haven’t historically traded at such high valuations. The risk in these “safe” assets, which represent the opposite of the go-go growth stocks that most investors assume must drive a stock market bubble, was apparent in the aftermath of the most recent presidential election. When the 10-year treasury yield ran from 1.4% in June of 2016 to 2.6% in December 2016, the utilities sector lost 14% even as the overall market rallied 10%.

The bottom line is that investors worrying that the stock market is too high and due for a decline need to recognize that it is not speculative growth stocks driving the rally, but conservative, low growth companies that have reached record high valuations. This stands on its head the way most investors think about stock market bubbles. We can’t prepare for the next crisis by buying insurance against the last crisis. Unfortunately there are new and different lessons for investors to learn in the years ahead.