In our post on the threats and opportunities facing health care investors in the decade ahead, we described the way that the US health care system is woefully inefficient to a degree that sets it apart from the rest of the world. The chart below shows how the US spends far more per capita on health care while receiving quality of care on par with Chile and the Czech Republic. The arrows show how the US should be able to deliver over six additional years of life expectancy at the current level of spending (green arrow), or be able to cut spending by 30% while still delivering the best health care system in the world (orange arrow), or slash spending by 65% while still maintaining the current quality of care (red arrow). 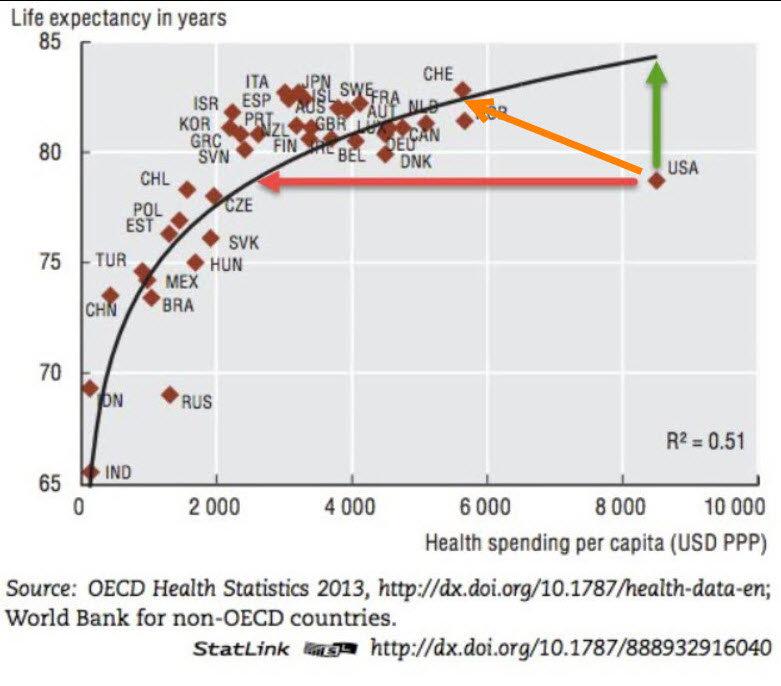 So how do we tackle this problem? While there is likely no single grand solution, we believe that the “smartest people in the room” when it comes this question work at the Advisory Board Company (ABCO). Indeed, when the ObamaCare insurance exchanges rolled out in such a catastrophic manner that it appeared the system might fail as soon as it got started, who did the government turn to but former Advisory Board CEO Jeffrey Zients. 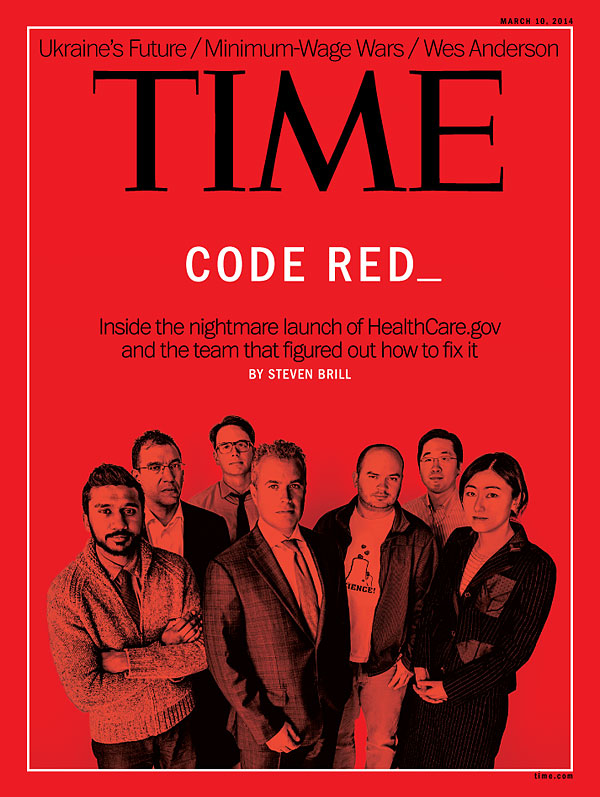 That’s Jeff in the middle. Thirty days after he was asked to lead a “tech surge” to fix the ailing website, the online exchanges were working. While there is plenty of criticism of ObamaCare, today the functionality of HealthCare.gov is a non-issue.

Years ago, Advisory Board was a consulting company that worked with best in class, predominately nonprofit hospitals to identify best practices for keeping costs under control and improving the health status of patients. Because any given hospital doesn’t want to participate in numerous research co-ops of this kind, Advisory Board created a competitive advantage by being able to attract the very best research participants. With access to these insights, the company packaged them up into recommendations across a range of topic areas which they then sold to hospitals across the country.

So how exactly does the company help their customers improve the quality of care they provide while reducing costs? Some examples:

This combination of top-notch research based on the input of participants in their proprietary research co-op with custom built technology tools for implementation lead to the company growing revenue by 4x (15% a year) during the decade leading up to their fiscal year ending in March 2014. A lot of this growth was organic, but the company also used their broad visibility into their customers’ needs to identify small, private companies offering new tools, acquired them at very early stages (sometimes pre-revenue), and then successfully rolled the solutions out to their entrenched customer base.

Growing this fast didn’t take much reinvestment of earnings beyond acquisition costs because of the asset-light nature of their business model. In fact, because the company signs customers to multi-year contracts and enjoys 90%+ renewal rates, they generate significant cash from the deferred revenue they book. This led to free cash flow running at two to four times the rate of net income.

While the company doesn’t need to purchase a lot of assets to grow, they do need to invest in their income statement. Since newly released software tools have all of the expenses of mature programs, but much more limited user bases, these early stage programs have lower (even negative) profit margins. But as each tool matures, it generates strong margins. As they pursued their growth opportunity, the company’s operating margin fell from the low 20s to about 7%. However, we believe that as the company matures and new software tools become a smaller portion of the total tool offering, the company’s profit margins will expand materially. 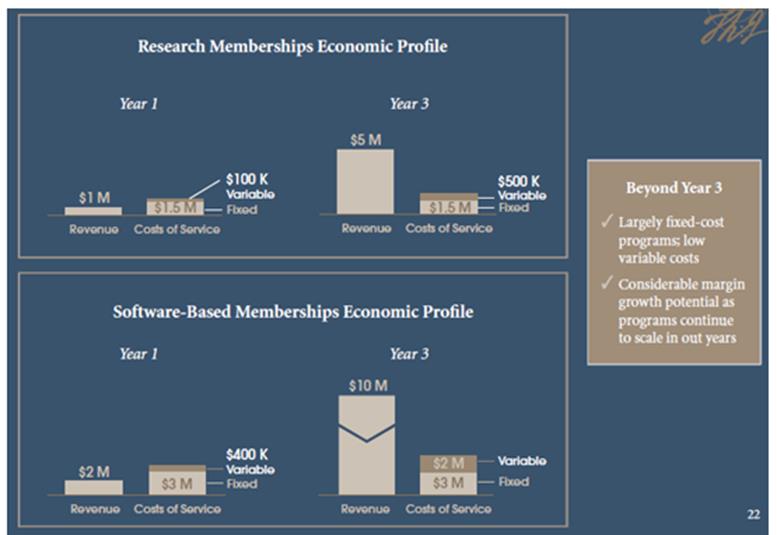 However, the last two years have been very challenging for the company. During the decade ending with their 2014 fiscal year (March 2014), the stock produced 13.3% annual returns vs the S&P 500 total return index appreciating at 7.4% per year. But over the next two years, the stock dropped in half while the S&P 500 rose 15%. This decline was primarily due to a slowdown in the company’s growth rate with additional market concerns related to the company’s acquisition of a business that provides very similar services, but to the higher education market rather than health care. Over the last year, the stock has been highly volatile, but has rallied by 40% vs the S&P 500 up 18% for reasons we’ll explain a bit later.

While 2014 revenue growth was over 14%, concerns about a pending slowdown were realized in 2015 as the company’s additions of new “contract value” (ie. new client contracts) began to run at a sequential growth rate that would not produce mid-teens growth over time. By mid-2016, the company was growing revenue at just 4% and the health care segment (more on the education segment below) was growing at what we estimate was just 1.5%.

This level of growth is not acceptable to typical growth investors and the stock was slammed. When the company issued 2016 revenue growth guidance in the mid-single digits in February of last year, there was a panicked rush for the exits by momentum/growth investors and the stock fell a remarkable 48% the next morning before rallying strongly off the low to finish the day down 27%. But that was the low for 2016 and leading up to the election the stock rallied almost 70% or to 23% above the price it was trading at the day before they lowered guidance.

Separately from the growth slowdown back in late 2014 the company made a major acquisition of a company called Royall & Co that provides similar research-based consulting and software tools to higher education organizations. While this seems like a departure from the company’s roots, its not. Advisory Board was founded in 1979 as a general consulting firm serving all industries. In 1997 the company spun off Corporate Executive Board (ticker CEB), which was a $2 billion market cap company in its own right at the end of 2016. The terms of the spinoff had Corporate Executive Board serving for-profit companies while Advisory Board retained the right to serve health care and education end markets. While Royall & Co made Advisory Board the largest player in the education market, they have long had their own education offering. Unfortunately, initially the merger looked very poorly executed with the Royall & Co executive team leaving the company unexpectedly shortly after the deal with done, casting major doubt on the largest deal in Advisory Board’s history just as their core health care business slowed sharply.

Today, the company continues to face slow demand for their core health care offering as hospitals have gone into panic mode after the election of Donald Trump and the selection of Tom Price as Secretary of Health signaled a potential rollback of ObamaCare that may massively crimp hospital budgets at least in the near term. But with the slow down is coming rising profit margins as our thesis that a slow down in new product launches would take the pressure off margins begins to play out.

But it is important to remember that Advisory Board gets paid to help hospitals plan for the future, decide on strategic priorities, run their businesses well and improve patient outcomes. The disarray that may result from the rollback of ObamaCare is an opportunity, not a threat to a company that helps hospitals deal with change. But there’s no doubt that in the short term, a freezing of budgets will make it hard to sell to new clients or increase the number of subscriptions. That being said, client retention rates have held near all time high levels.

We’re not the only ones who think there is significant value in the company’s shares. Recently, Elliot Associates, run by billionaire hedge fund investor Paul Singer, has purchased an 8% position in the company. Given his past history of activism, it is no surprise that Advisory Board has now undertaken a strategic review, which we believe will result in one of a couple of outcomes 1) the outright sale of the company, 2) a deal to take the company private, 3) the sale or spin-off of the education business or 4) an aggressive plan to driven margins much higher and faster than the current market price implies is possible.

At about the same time as Elliot Associates took their big stake in the company, Corporate Executive Board, the sister company that Advisory Board spun off years ago as described above, announced they were being purchased by another company at a 25%+ premium to their market price. While CEB and ABCO serve different markets, the economics of their business are quite similar and CEB has similarly seen low growth. Historically the growth rate of Advisory Board has been higher than at CEB and we believe that the health care and education markets offer a far more expansive opportunity as an end market than the corporate sector that CEB focuses on.

Advisory Board as a stock has been volatile and subject to falling in and out of favor with momentum investors. But Advisory Board as a company has generated enormous value for their customers and shareholders over time. Their unique place in the health care ecosystem and special relationship with their customers via their research co-ops creates an enviable competitive moat around their business. If you return to the chart at the top of this post, it is clear that there is a huge amount of “fixing” to do in the health care sector. The move to the optimal outcome shown on the chart would result in cost savings equal to 6% of GDP! If Advisory Board can play a small role in making that happen, the company will rightly reap large returns for its shareholders, in addition to the value they will bring to their customers and the country.

Oh, and then there’s that whole education industry with its own runaway costs and poor student outcomes for them to address…

Ensemble Capital’s clients own shares of Advisory Board Company (ABCO).