First Republic: A Customer Service Franchise Disguised As A Bank

Unlike most asset managers, at Ensemble Capital we don’t use financial data screens as part of our idea generation process. Instead, we read voraciously; collecting stories, tidbits and mental models that help us identify companies with wide moats. One of the best ways to learn about wide moat companies, many of which won’t show up on a quantitative screen, is by reading interviews, such as those produced by Value Investor Insight and Manual of Ideas, with high performing investment managers who also seek competitively advantaged companies.

Sometimes, a short comment by a smart investor can reframe your entire thinking about a company and make you recognize an investment opportunity you would have otherwise missed. This happened to us back in 2012 when we read a Value Investor Insight interview with Shawn Kravetz of Esplanade Capital. After the financial crisis, we had come to see banks as facing a regulatory environment that would consign them to the role of a financial utility where their return on equity was effectively capped. At the very least, while some banks may have a low-cost competitive advantage, we felt that banks lacked any sort of differentiation-based competitive advantage.

But then we read Shawn’s take on First Republic and it instantly transformed our understanding of the company:

“We consider First Republic a retail business with a superior franchise. It’s an upscale retail and commercial bank that does good old-fashioned banking – it’s a relationship business to them, where employees make customers feel like they’re being served by an exclusive private bank. How often do you feel like that with your big dumb bank across the street, where no one knows who you are and doesn’t care? This is a company with great economics that is in only six markets in the U.S.

It hasn’t come close to penetrating those markets, and there are probably another 10 to 20 in which it can expand. We believe it can increase earnings organically at 15%-plus per year for many years. If you looked at this as if it were a retailer, I can assure you it would be deemed worth a lot more than its current 12x earnings multiple. Because it’s a bank, people think that’s expensive.” [emphasis mine]

Banks make money by borrowing short-term money (generally client deposits) and lending long-term money (traditionally residential mortgages, but today through all sorts of vehicles). Money is the ultimate commodity, so you can think of banks as a commodity-based business that buys and sells an entirely undifferentiated product (money).

Net Promoter Scores (NPS) are a widely accepted way to evaluate customer satisfaction. In the table below, you’ll see that First Republic’s NPS places them ahead of Apple and Amazon when they are the “lead bank” in their client’s financial life. The banking industry as a whole, on the other hand, is viewed quite negatively by most people. You can see the dim view people have of the banking indsutry in measures other than NPS as well. In industries where all the competitors are working to serve customers well, strong customer service is just table stakes. But in an industry such as banking, where customers are often outraged at the major players, customer service becomes a strong competitive advantage. 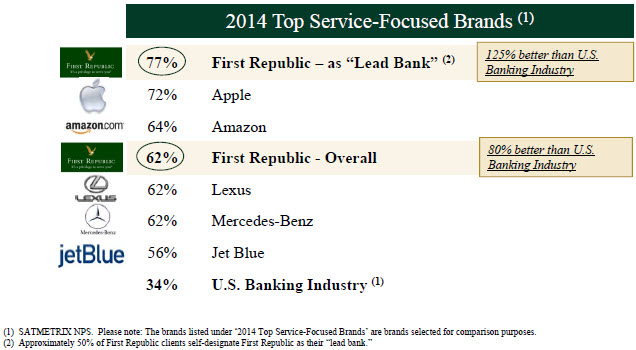 According to Michael Porter’s competitive advantage framework, there are two primary forms of competitive advantage; low cost and differentiation. In a commodity-based business, all competitors are selling the same thing and so they must compete on price. This is how most of the banking industry works. They buy and sell money, the ultimate fungible asset. So when you are looking for a new mortgage (or looking to “buy money”) you look for the cheapest seller and frankly don’t really care which bank you use. In fact, you know that your mortgage is very likely to be sold to some other bank in short order, meaning you don’t even know who will be providing service in the future (notably First Republic does not sell the servicing rights on the loans they underwrite).

But when you sell a differentiated product, your customer cares less about price and more about the differentiated aspect of what you sell. At First Republic, their customers aren’t buying and selling money like they do at the “big dumb bank across the street”, they are buying the peace of mind and time savings that come from having a customer service focused organization taking care of their banking needs.

This commitment to putting customers first has paid off handsomely for First Republic. Founded in 1985, the company has grown enterprise value at a compound rate of 23% a year. Recently, they became the first bank to cross the $50 billion in assets threshold primarily through organic growth. You’ll notice on the chart below that the enterprise value flat lines during the financial crisis. That’s because management sold the bank to Merrill Lynch in 2007 at a premium valuation and then bought it back in 2009 during the wreckage of the financial crisis at rock bottom valuations. 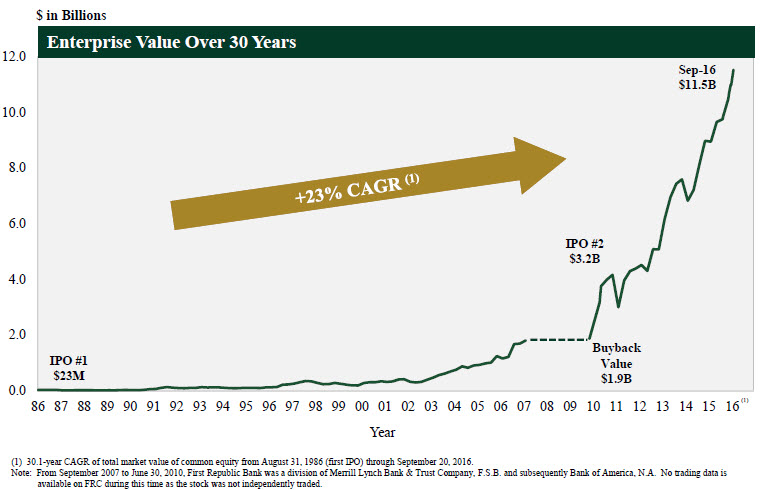 Banks that compete on price are incentivized to do everything they can to get an edge on their competitors. Historically, this has led many banks to make big bets on the yield curve and to make very shaky underwriting decisions. But with its differentiated offering, First Republic doesn’t have the same bad incentives. Knowing that their margins and growth are primarily a function of customer service, the bank runs a plain vanilla balance sheet with a focus on stability.

Their net interest margin, the difference between how much they earn on their assets vs what they pay for their liabilities, has been incredibly stable over the last 15 years even as interest rates have swung wildly. The bank targets a conservative balance sheet and sells off longer term and fixed rate loans (but importantly, keeps the servicing rights so that they retain the customer service interaction). 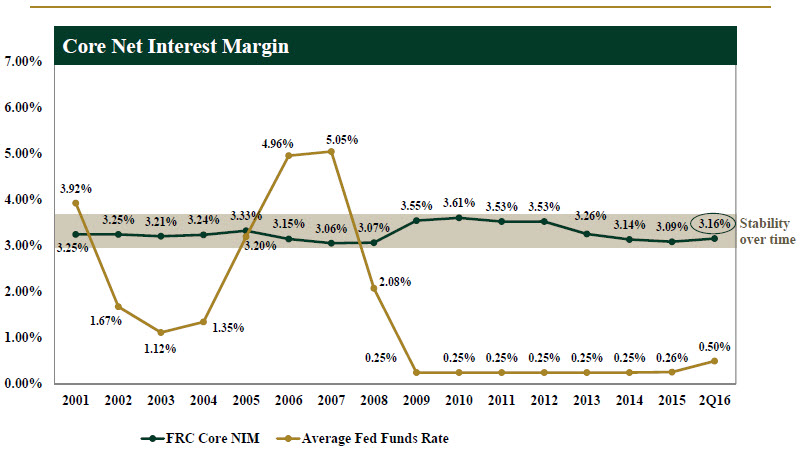 Just as impressively, the company only lends money to people it thinks can pay back the loan (what a concept!). Since their founding, losses on single family residential home loans have totaled just 0.07%. Over the last 15 years, during the boom and bust of the housing bubble, net charge-offs have been just 0.03% and only rose to 0.14% in 2009-2010. In comparison, the top 50 US banks saw average annual losses 1300% higher than First Republic’s. 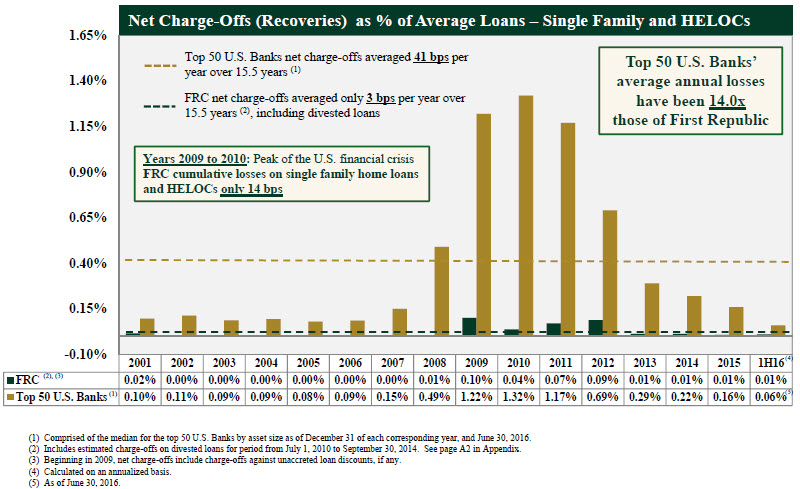 First Republic’s ability to charge premium pricing is, of course, limited. No matter how great their service, their customers won’t pay 5% for a mortgage if they can get it for 4% somewhere else. But while we expect their ROE to be broadly similar to their peers over time, the company is able to use their customer service competitive advantage to grow. So their moat is deployed in service of putting more and more capital to work at solid ROEs, rather than generating super-premium returns. Of course, at some point in the future, should their growth opportunity fade, the company could focus on customer retention and likely work to improve their ROE. But with such an enormous growth runway ahead of them, we think they’ll continue to utilize their moat in service of growth rather than maximizing current ROEs.

Like many of the companies we find attractive, First Republic is idiosyncratic. While they have competitors, they are in many ways playing their own game. In theory, the banking industry as a whole could decide to take customer service seriously, but we think the “risk” of this happening is vanishingly small. It isn’t easy to build a culture built on serving customers first, especially when making risky loans or charging excessive fees can juice near term results. But in First Republic, we have found a company who we trust to steward our capital and remain focused on creating value through putting customers first.