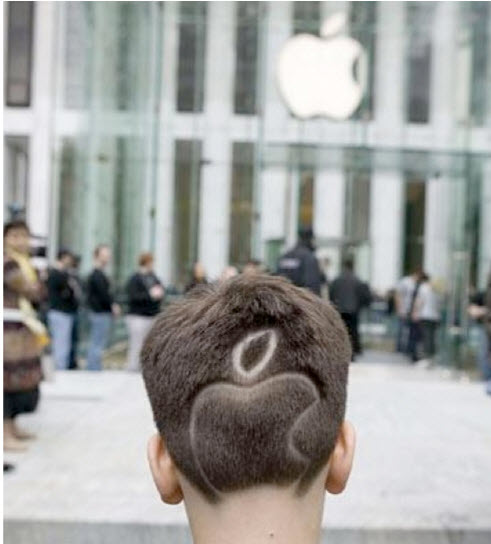 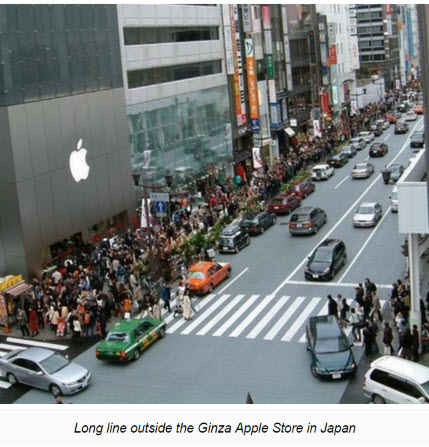 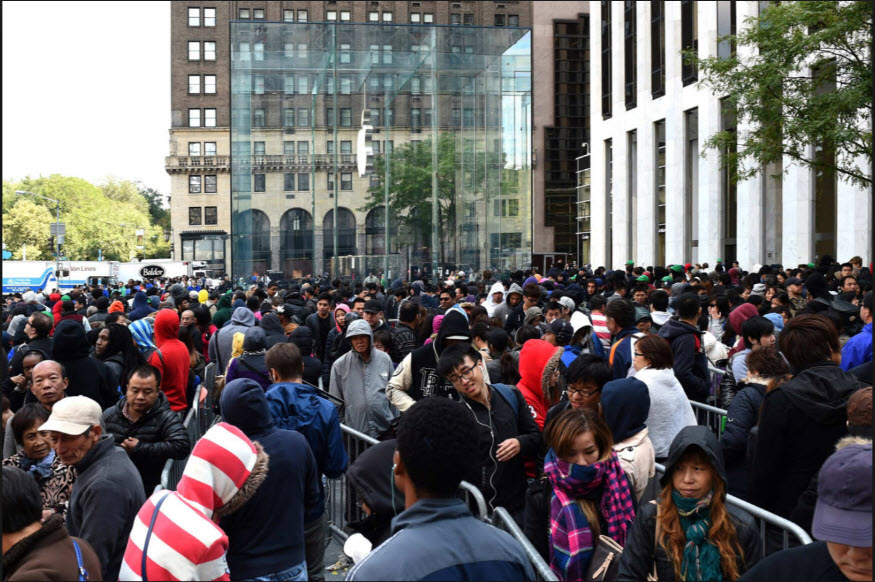 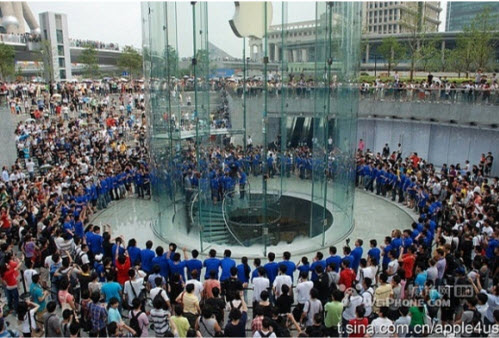 Line at the opening of Shanghai Apple Store

Apple has been in the business of “delighting” its customers since the introduction of the iMac after the legendary return of Steve Jobs in 1997. While most analysts examine the company based on its financial statements, market rates of growth, projections of market share, etc., to track the health of the company, Apple’s management team has made it a point to frame its focus on customer satisfaction rates for its products. And for good reason, because customer satisfaction rates drive retention and free, viral word of mouth marketing when it comes to consumer products. That has been the causal driver of the measurable financial reports that analysts focus on to gauge the success of Apple’s business model over time.

Horace Dedieu, publisher of the Asymco blog is a very insightful business analyst, with a focus on Apple. He was a former analyst at Nokia, which gives him great perspective from which to watch the machinations of the smartphone industry and the technology/innovation business more broadly. He is also a Senior Fellow at the Clay Christensen Institute. Yeah, THE Clay Christensen, the father of disruptive innovation theory.

“My simple proposal is to think of Apple (and actually any company) as a customer creator. It creates and maintains customers. The more it creates, the more it prospers. The more customers it preserves the more it’s likely to persevere. This measure of performance for a company is not easy to obtain. It’s not a line item in any financial report.”

This is an interesting way of viewing Apple — it is in the business of “creating” and retaining customers. Such terminology only makes sense in the context of businesses that generate high rates of customer loyalty. Hence, Apple’s focus on “delighting” and satisfying their customers with their existing products. By doing so, they create the hyper-loyal “fanboy” mentality among their customers that drives the large-scale adoption of new products driven by customers’ expectations of what Apple will deliver on new products based on their experience with existing products.

To wit, in its first four quarters of sales, the iPad generated $12B of revenue while the Watch has probably generated an estimated $5B. These large first-year sales numbers ranked the businesses as legitimate S&P 500 companies in their own right based on their first year of sales! How many other companies can do that?

“Buyers are buying experiences. They are buying safety, comfort, convenience, simplicity, productivity. They are buying modules to combine with other modules that help to do something. Something better. They are buying hope, satisfaction, escape or vanity. In other words, they don’t know what they want but know when they have it. They trust products unseen which have a reputation of delivering that which they think they might like, without knowing what that is. By employing the product, and a whole lot more—effort, time, mental energy and repetitive actions—they learn to exploit a product to achieve satisfaction.“

In our post, Why Apple’s iPhone Franchise is Sustainable, we made a similar argument about why customers buy iPhones and how this comprises a key part of Apple’s moat. In fact, given the importance that the iPhone plays in its users’ lives, both in terms of all of the tasks it can accomplish and the time users spend every day with the device, we made the argument that the $1/day it cost was an incredible value over a 3 year period.

In our post, we examined the Total Available Market (TAM) to get a sense for how many potential customers there are globally who could afford to buy an iPhone, which today is at the center of the ecosystem. We believe Apple can probably reach 1-1.5B people globally with its flagship product, the iPhone. These are also the most profitable customers in the world since they possess an income that affords them the luxury products Apple sells.

Dedieu spins the analysis a different way and examines the “daily” potential revenue Apple can derive from its customers based on the daily revenue accumulating over all of its devices (not just the iPhone) over their usable lives. Given the loyalty that Apple earns from its customers and the value they derive from the ecosystem, this is a fair way to examine the Total Available Revenue (TAR) that Apple can potentially earn. Loyal customers come back to Apple to upgrade their devices as needs and technology progress as well as buy new products. From this perspective, we are viewing customers’ Apple devices consumption as an annuity, measured on a daily basis.

The closest figure we have is that today Apple has one billion active devices in use. 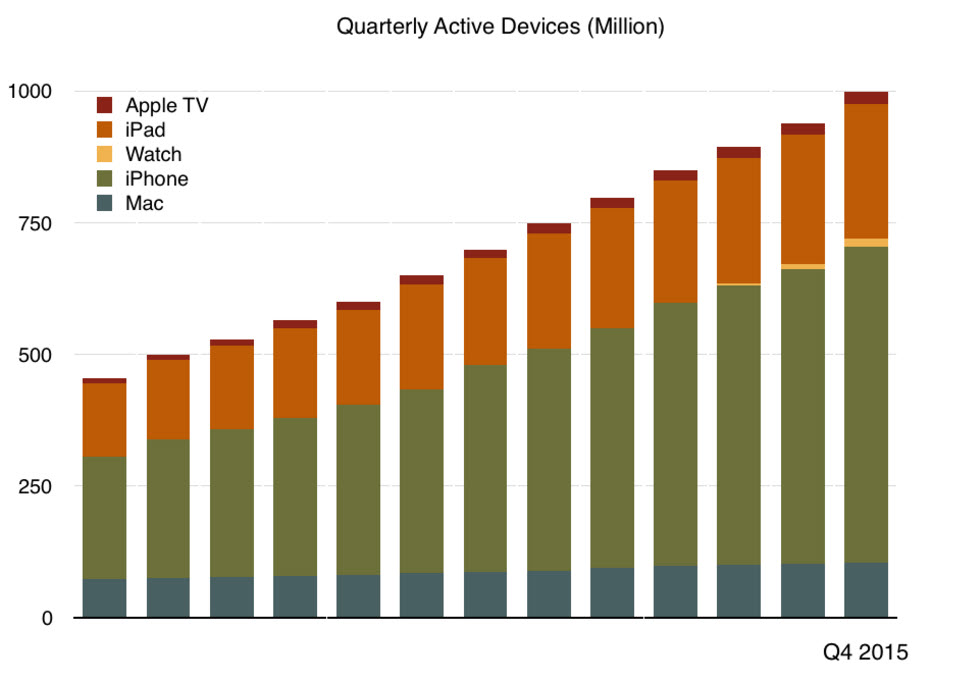 So we know that at least Apple has created a large number of customers. Knowing total devices sold and number in use means that we can be sure that 63% of all the computers Apple sold are still in use.

These measures, rather than those of “comparable companies” might lead to different conclusions: That customers are loyal, that they will value the brand and that they are invested in a network. In other words, that they will buy from Apple again.

Considering this audience and the revenues generated, we can categorize the revenue by active device as follows.

Each bar represents that product’s revenue per day in a given quarter (from Q4 2012 to Q4 2015). Each year is therefore represented by a different color. Dark green for 2012, light green for 2013, burgundy red for 2014 and dark red for 2015. For example, each iPhone in use was generating exactly $1/day in revenues (including services and accessories) during the first quarter 2013.

This allocates all of Apple’s revenues to these products and by proxy to customers.

In summary, the “average revenue per Apple device per day” is currently $0.68. If we assume one unique user per device then Apple collects 68 cents from each customer each day.[3]“

In reality, each device is not owned by a distinct customer because many customers have more than one device (Dedieu also notes this in his footnote).

If we think of Apple of being in the business of creating customers (as really most valuable businesses are) and then monetizing them through products and now services, what is the potential revenue per customer that it can generate?

According to Dedieu, the iPhone translates to about $0.80 per day per customer. The Mac, iPad, and Apple TV generate about $0.85, 0.40, and $0.35, respectively, while the less mature watch is likley to generate about $0.30 in our view (vs the $0.60 that Dedieu calculates) for a total potential device revenue per customer per day potential of $2.70 per day. As it stands today, with an estimated base of customers of about 600MM (our estimate, including a minority that bought 2nd hand devices), Apple’s revenue potential from devices is $590B/yr compared to its 2015 CY device revenue of approximately $214B (Services were an additional $21B). Among its existing user base, Apple has the potential to almost triple its annual revenue with existing products.

How can it grow this per customer revenue? Obviously adding more devices that bring the Apple experience to other areas of a customers’ lives makes sense. Rumor has had it that the company is working on an Autonomous Electric Vehicle as an example. The new Airpods are also another set of devices that play into the ecosystem while both leveraging capabilities of existing devices and adding more value and ecosystem integration. Other accessories like Beats headphones also play into bringing in high margin add-on product revenue to complement core devices Apple sells.

While Services only generate revenue of about $0.10 per day per user, this is an area that is growing rapidly and will continue to see additional focus from Apple. Adding services, such as Apple Music and iCloud storage and backup subscriptions as well as transactional services like the App Store, Apple Pay, iTunes, and Apple TV content adds incremental value to customers by leveraging the power of the devices already in customer’s hands (increasing usage and satisfaction) while also generating incremental high margin revenue for Apple. With the rapid global growth of subscription services for music and video used on smartphones, we know these are very appealing and value-enhancing services that users are willing to pay for. The fact that the devices are mobile makes the need for cloud services to store data that can be accessed anywhere an intuitive incremental service offering. Warranty and financing services are already a part of Apple’s offerings, though not in all markets yet.

What else does Apple have in store over the next few years? Given the trend towards the penetration of technology into many everyday industries (Marc Andreessen’s “software is eating the world”) and increasing consumer expectations for high service levels (i.e. to be “delighted”) with ongoing subscription-based value delivery, we see increasing opportunities for a company with Apple’s resources and skills to continue adding value to its customers’ everyday experiences.

Just to make the illustrative point, if Apple can grow its daily potential revenue by 20% from $2.80 (devices+services) to $3.36 and adds an additional 200MM users (~7% per year) over the next 5 years, it will have a Total Available Revenue opportunity of $1 Trillion from its customer base.

How much of that Apple will be able to capture remains an open question, but getting to the Total Available Revenue opportunity does not seem like a stretch given the company’s ability to create and retain its loyal and growing customers. Apple is already the world’s most valuable company and as long as Apple continues to focus on creating customers and delighting them with intuitive, usable, and beautiful products, it’s likely to become even more so.