With Unemployment Below 5%, Is There Still Slack In The Job Market?

Recently a client asked us about the idea that the “real” unemployment rate is higher than the reported unemployment rate (currently 4.9% or about the level considered “full employment”) due to many people having left the workforce in recent years. These “discouraged workers”, according to this idea, should really be counted as unemployed, but are not since they are no longer actively looking for a job. The flip side of this theory, if it is correct, is that the labor market still has considerable slack and therefore the economy is unlikely to be nearing the end of the current expansion.

While at Ensemble Capital we don’t focus on using macroeconomic forecasts to drive our investment decision-making, it is critical for investors to have an evidence-based understanding of the context in which they are investing. For instance, bottoms up research on a staffing company like Robert Half International (for example) wouldn’t be complete without the investor having a sense of where the economy is in the employment cycle.

Below is a chart showing the US workforce (actual number of people employed and/or actively looking for employment) and the participation rate (the workforce as a percentage of the working age adult population). 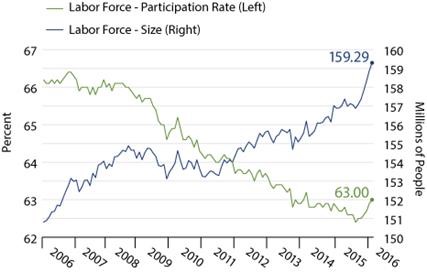 You’ll note that the workforce has grown pretty consistently since 2011. However, it hasn’t grown as quickly as the population has grown. If the participation rate was 66% (the pre-crisis level) instead of 63%, we’d have an additional 7.6 mil jobs. Since 2008, we’ve seen 4.3 mil jobs created. But, in order to keep the participation rate steady, we would have had to have seen 11.9 mil jobs created. So as far as how many workers might be “missing” from the official statistics, it might be reasonable to suggest it is about 7.6 mil (you’ll see below that this number is similar to another, more direct way of measuring this issue).

However, labor force participation has been declining since 2000. From 1970-2000, workforce participation for woman increased from 43% to 60% as women who had historically stayed at home started working. During that same time, the participation rate for men fell steadily from 80% to 75%. This decline happened in the context of a strong economy and was likely due to the aging population as well as a decrease in men working as more women started bringing home paychecks. 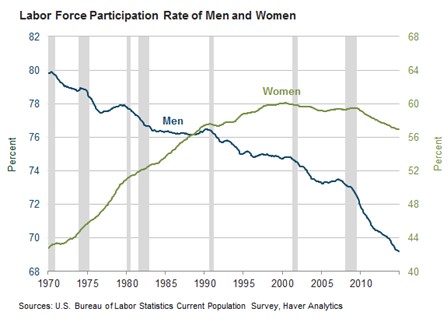 So why aren’t these jobs being filled (or at least filled quickly)? One reason is a skills mismatch. The jobs that are being created in the service sector require skills that discouraged workers from the manufacturing and construction industries don’t have. Skill mismatches take a long time to resolve, but we’re now at the point where seven years of new workers have entered the workforce since the crisis and these young workers are more likely to have obtained skills better suited to current needs.

The other issue is the lack of housing mobility. A worker who is underwater on a $200,000 home might be able to make the $800/month mortgage payment, but they can’t afford to sell the house for less than their mortgage let alone come up with a down payment on a new home. So while there may be jobs in other states, these workers can’t move to fill them even if they have the right skills. This has been a rather large problem as housing prices nationally only recently returned to pre-crisis levels. As home equity starts going positive it becomes easier for unemployed workers to start moving to where the job openings are.

We think that jobs are one of the most important indicators of economic health and net-net the job market has been slowly but steadily improving ever since 2009. It is impossible to know exactly where we are in the employment cycle, but since recessions generally occur once the unemployment rate hits full employment and then hooks back up it is useful context to know that it may be possible for the economy to keep adding new jobs without pushing the unemployment level down to unsustainable levels if in fact there is a pool of workers on the sidelines who may rejoin the workforce in the years ahead.